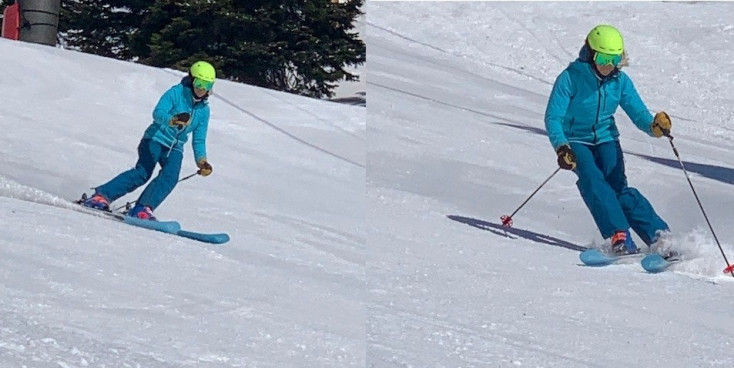 For many years, womens’ skis were simply a mens’ ski- with fewer layers of metal and a pretty top sheet. Companies didn’t put much effort into producing a ski that was actually better for a woman to ski.  When Renoun Skis decided to add a women’s ski to its quiver, founder Cyrus Shenck recruited a committee of women to design, prototype and test this new offering.  Combining Renoun’s patented materials technology with design features that recognize the difference in female anatomy and physiology (like center of mass and strength to weight ratios), this committee went to work.  Ladies- meet the Earhart 88.

OK- stats first. The Earhart 88 sports a versatile 127-88-111mm profile with mild early rise and slight tail rocker. I skied the 170 cm which has a 14.5 m turn radius.  Its core construction consists of a scaffold of aspen wood inlaid with the award winning polymer HDT Vibe-Stop. The magic of this material is that it stiffens as more pressure is applied.  So the faster you go, the sturdier the ski is. This is sandwiched between layers of titanal metal. There is a traditional vertical sidewall and camber under foot. The ski weighs in at a featherweight 1440 gm.

What that means is the Earhart is a great ski.  My first impression, and this remained consistent throughout the test day, was how light this ski was.  Tinkerbell feet!! The tip and tail rise made the ski super easy to move in to and out of a turn.  With such a light swing weight, short turns on groomed snow and in bumps were a breeze.  Medium radius turns enjoyed the same advantage and I could feel the increased stability as my speed increased.  When I opened up the turn to an even longer radius, I didn’t feel the turn entry was as progressive as I would like and there was a small amount of wobble at the apex of the turn.

Test day started out on pretty firm snow and softened to spring mush.  The Earhart managed both conditions (and those in between) with aplomb.  On firm snow, in those short and medium turns, she held with a tenacity I would expect from a much beefier ski. In longer faster turns, I did feel some mild chatter and a loss of integrity from the tail. As the snow softened and push piles formed, the Earhart held her own. The turn ease was uninterrupted by the push piles and the natural arc of the ski was soooo fun in slightly softer snow as she flexed through the turn.  As the piles grew through the day, I did notice that the tip was deflected every so often.

Moving off piste, Earhart’s fine attributes played through in the bumps and crud. The already mentioned light weight and tip/tail rocker helped make a pivot and short turn in the bumps easily accessible.  Tree skiing, requiring quick moves and variable radius turns, was also made easy.  As the crud got cruddier there a small sacrifice in the skis’ tracking; she bounced around a bit.

So- who is this ski just right for?  This is a solid and aspirational ski choice for an intermediate to advanced skier.  The Earhart is a fun, lively ski. She is forgiving enough to introduce off-piste skiing to a trepidatious intermediate.  Short turns in the bumps and trees will feel easy.  For the advanced skier, she has the moves and versatility to travel into some legitimately cool terrain. Best of all- she is a great ski to bring out the best of either skier! The Earharts retail for $899 and come in 149, 156 cm, 163 cm, 170 cm and a 177 cm.