While the idea of electric bikes has been around for a long time, they’ve really started capturing the imagination of bike riders in the past decade or so. Today we’re going to take a look at a few of the best e-bikes on the market to give you an idea of what’s available. 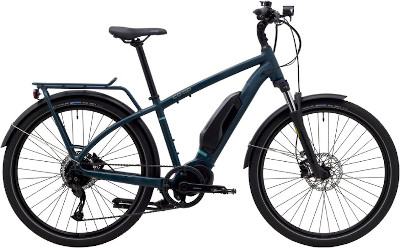 REI’s house brand of cycles is always a solid bet for good value. And now that they’re in the e-bike game, that goes for electric options as well. A Shimano 250W motor is at the heart of this city bike, and provides pedal assistance up to 50 miles at a time.

One of the best things about this bike is that it’s already set up for commuting. It has a rear rack for carrying things. A center-mount kickstand for extra stability. Fenders and lights. It even comes with a bell. If you’re looking to get to work on a bike, you can buy this one and start riding immediately. You don’t need anything else.

A 75mm suspension fork is a nice touch, too — it isn’t absolutely necessary, but it’ll soak up some road bumps without zapping your pedal efficiency. 27.5″ wheels are quick to spin up to speed. A 300-lb. carrying capacity should be everything you need. This is really an e-commuter’s dream bike. 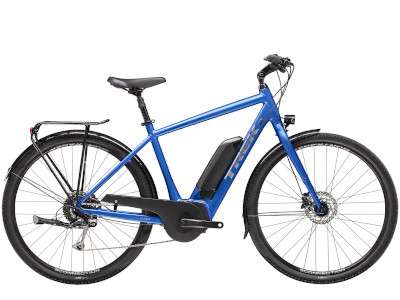 While not as cheap as the SwagCycle, this commuter-focused hybrid e-bike is an absolute banger of a deal. For less than $3,000, you get a bike that will take you up to 63 miles on a single charge (based on Bosch’s “average rider”).

But that’s not the best part of this bike. The best part is that it’s already completely set up to be your commuter. It’s got a rear rack, a kickstand, a chainguard, lights, and fenders. They’re already installed and ready to go.  It even has an adjustable stem and a suspension seatpost for added comfort.

When it comes to value for an e-bike commuter, you’ll have a hard time beating the Trek Verve+ 2. It doesn’t have the same high-end parts as some of the other bikes on this list. But it has everything you need without the things that drive the price way up. 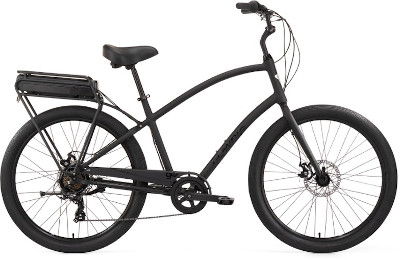 Legendary Electra comfort. Townie sensibility. And a Hydrive rear hub motor to get you up to 50 miles on a charge. It’s a combination that’s tough to beat. And at less than $2,000, if you aren’t looking for a ton of speed and efficiency, it’s absolutely the right bike for you.

Don’t get me wrong; the pedal assist will get you up to 20mph. It’s just not as efficient as something like the Trek Verve+. That being said, you won’t find a better combination of power and comfort than he Townie Go! 7D.

Shimano 7-speed shifting, disc brakes, and 27.5″ x 2.35″ tires all add to the value of this Electra. A rear rack means you don’t have to add more accessories to start carrying things. And have I mentioned comfort yet? There’s just no bike out there that gets you in a better position for a quick jaunt to work. 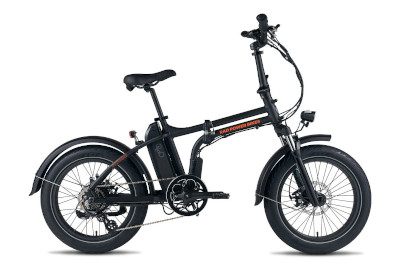 This bike has all the adjectives: electric, folding, fat-tire. It sounds like a weird combination. But when you put it all together, you have a bike that’s just extremely useful. It folds up small so you can commute with ease. It packs a motor that puts out up to 750W for a short period of time. And the 3.3″ tires help you roll over anything that gets in your way.

It’s a strange combination, but it’s an absolute blast of a bike. You can really use it for just about anything. I wouldn’t recommend taking it on a trail ride like you might with the Genius or Powerfly, but you could do some gravel without trouble.

Lots of little touches help here. The rack, suspension fork, small folding hinge, and fenders might not be hugely noticeable at first. But they make it stand out above similar bikes. Check out our full review of the RadMini 4 here. One of the best electric bikes under $2,000. 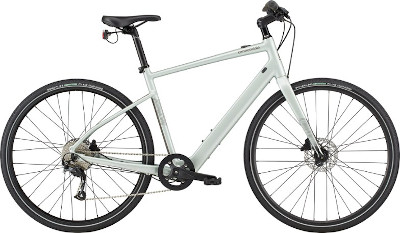 Cannondale’s Quick bikes are fantastic commuters — they’re simple, efficient, and can deal with the road hazards you’ve come to know and love in your career as a commuter. But they’re also great fitness bikes, capable of taking you on long rides with their efficient power transfer and road-bike heritage.

The Neo SL 2 is no exception, but it packs a 250W rear-hub motor to help keep you going over the long haul — up to 40 miles. The fact that it’s a rear-hub motor is great for fitness enthusiasts, because it’s not nearly as hard to pedal as a mid-drive bike when the motor is off. So you don’t need to commit to constant pedal assistance.

The components on the Quick Neo SL 2 aren’t the top-of-the-line bling you’ll find on some options. But you also won’t have to take out a second mortgage to buy one. This is an especially great choice for people interested in — but not yet committed to — e-bike commuting and fitness. 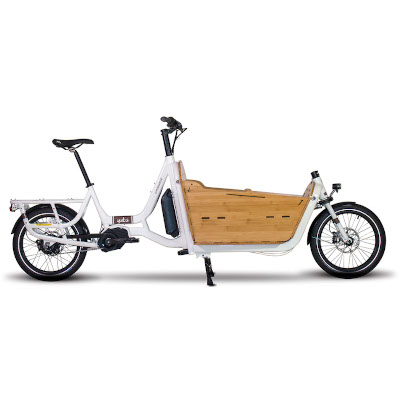 Yuba’s cargo bikes are great. You can carry an absolute ton of stuff on them. But when they’re fully loaded down, you’ll need some serious strength to keep them moving, especially if you’re going up a hill. The electric Supermarché is here to solve that problem.

The Bosch CX motor is a very popular one on the latest e-bikes because it just performs so well. Solid power and great battery life mean you can get up to 20mph with pedal assist and not have to worry about draining the battery right away.

And, of course, you can pack the Supermarché with all of the awesome Yuba accessories you’ve come to expect. Side rails, seat kits, cargo canopies, base boards, and more are available to make this Yuba the perfect bike for your long-distance cargo hauling. 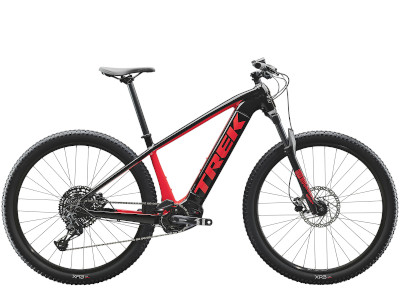 While the Powerfly is very clearly built as a mountain bike, the fact that it’s a hardtail makes it a solid choice for any kind of riding. You get great power transfer without rear suspension, and efficient power to the pedals is going to be even better when you have a Bosch CX motor backing you up.

Bosch estimates that a charge on this motor will get you up to 45 miles of riding, which is a huge boost over some smaller models. That’s enough for even a sizable commute, and will keep you going through long trail adventures on the weekends.

The SRAM SX drivetrain is a high-value way to give you solid performance without making this bike even more expensive, and the RockShox Recon fork will put up with a lot of abuse (though not quite as well as more expensive options). Overall, this is a high-value e-bike for commuters and trail riders alike. 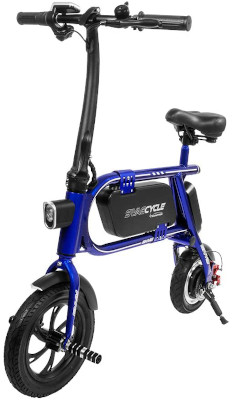 An electric bike for less than $500? Yes, you read that correctly. The SwagCycle Envy is just about the cheapest e-bike you’ll find anywhere. The best electric bike under $1,000. Of course, it stretches the definition of “bike” a little bit in that it doesn’t have any pedals. So it’s almost a scooter.

But with a 9-mile range and up to five hours of battery per charge, you won’t be worried about whether it’s technically a bike. You’ll just be headed out to get where you need to go, whether that’s commuting or buying groceries.

This little zipper has a 264-lb. carrying capacity, so you’ll be able to get yourself and a backpack or duffel bag around without trouble. A headlight and brake light help keep you safe at night. It even includes a bell. For $300, it’s hard to beat that. 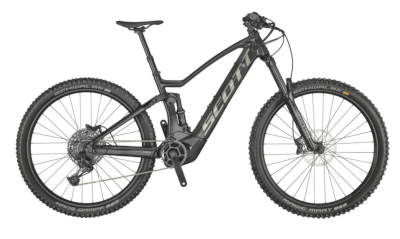 Scott’s Genius is a great trail bike — but when you add a motor, it becomes a capable commuter, as well. You won’t need the 150mm of front and rear travel to get to work, but you’ll love them for your weekend trail rides! You’ll also love the carbon/aluminum frame, SRAM drivetrain, and RockShox e-bike-specific fork.

The Bosch motor on the Genius eRide is a great addition, and the integrated removable battery is hidden completely in the downtube for a sleek look. The 900 comes with a 625Wh battery, but other models include even bigger batteries.

While the Genius is meant to be an all-mountain bike, all of these features mean you can take advantage of its power and pedigree no matter where you’re riding. That includes on your commute.

X-Treme sells a lot of electric bikes and scooters. But not many of them pack a 48-volt motor like this one. It’s the most powerful bike in the X-Treme lineup. And in good conditions, it’ll help you get up to 70 miles of range. In their in-house testing, X-Treme says they got this bike up a 5–7% incline for at 18mph for 45 minutes. That’s a lot of power.

The compromises you make with this bike are in the components. You won’t get a brand-name motor like the Shimano Steps system or the Bosch CX. You step down to Shimano’s Altus components, which likely won’t put up with a ton of wear and tear. Lots of house-brand components are difficult to assess.

On the other hand, it does have a cup holder and it’s a full-suspension bike focused on commuting. So if that’s what you’re looking for, this may be the bike for you.