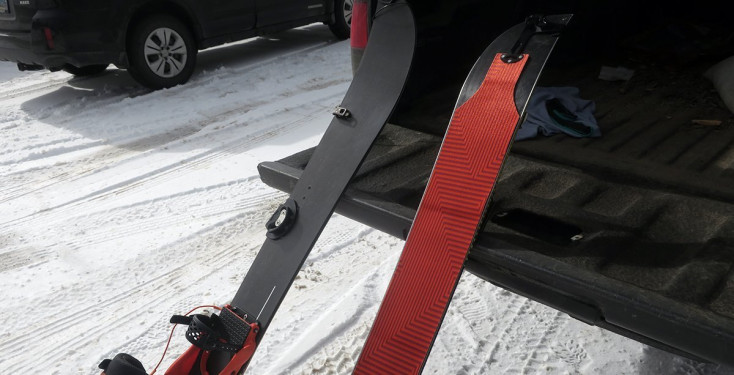 I jumped at the chance to try out the brand new Black Diamond Ascension Skins as for years now pretty much all my ski partners have sworn by Black Diamond skins on their AT setups. Splitboarding is at least 80% going uphill and so I’ve always put much more stock in uphill performance than anything else.

The Black Diamond Ascension Skins may be all nylon but they grab better than some mixed mohair I’ve tried even on firm late spring (read June) hardpack, digging in harder than your dad asking when you’ll finally move out of that mountain town and get a real job.

But where they really kill it is on the attachment to your split. Some other premium brands try to minimize their glue so after half a season you’re having to reglue or just plan on ski strapping your skins on for the rest of the winter. Or they go the other way and put on so much glue you always end up with residue on your board when ripping them off (and strain your triceps pulling them apart). Black Diamond has figured out the happy medium, with their Ascension glue making for an easy separation in the parking lot while still holding firm to your split on the snow. The tail clips, though, are nothing short of groundbreaking.

BD has figured out a perfect shape for the half-dome curvature of the tails of your splitskis, allowing you to really crank down hard and ensure they’re locked in. Much better than trying to use those flat, one-sided ski tail clips and even more secure than the primitive two-point tail-clips that had kinda been industry-leading practice. It can take a second or two to figure out the STS system but the tail clip really isn’t that tough and the shape locks it in harder than your girlfriend posting anniversary pics on your timeline.

With its glue that doesn’t rip off your wax, there will inevitably be some moments when the skin doesn’t stay perfectly adhered to your bendy split and that’s when this tail clip really comes in huge. I also like the thin wire nose loop, which is wide enough to get over your tip without having to manipulate the board’s nose clip.

If you split, you know all about downhill splitskiing with skins on. Admittedly these skins are a little grabbier than others (e.g. Voile’s entry-level) which can make splitskiing on manky snow or mash potatoes a little frustrating. But really, I’d rather have uphill grip over downhill glide, and I never noticed any uphill or flat glide issues. Most surprisingly even in spring and beyond conditions, I never had the crazy buildup I’d come to expect from split skins. The lack of mohair obviously helps here but man did that save my legs.

I used these skins basically all winter; in deep fluffy pow, June hardpack and sticky wet cement. I didn’t get the cling-ons customary on the sticky stuff, didn’t get that annoying skin/ski separation I’ve gotten accustomed to in deep pow, and they gripped almost as good as mohair on the hardpack.

I fell in love with mixed-mohair a few years ago but then had some issues with the light glue applied to try and offset the weight, plus the stunted downhill glide and they were getting threadbare after two seasons (and 3 regluings).

Black Diamond has been the gold standard of ski skins for a few years (so much that their glue renew, which I’ll add I haven’t even thought of having to add to these, is called Gold Standard).

I was blown away by the grip of the synthetic Black Diamond Ascension Splitboard Skins ($174.95) and the STS tail clip gives you security unmatched by most rival split tail clips. If you can only get one pair of skins, rest assured BD’s nailed it.

With traction like studded snow tires, just enough glide for splitskiing, glue that hits the perfect balance between sticky and not, and bomber tail clips, the Black Diamond Ascension 140mm has gotta be the best all-around skins I’ve ever tried.