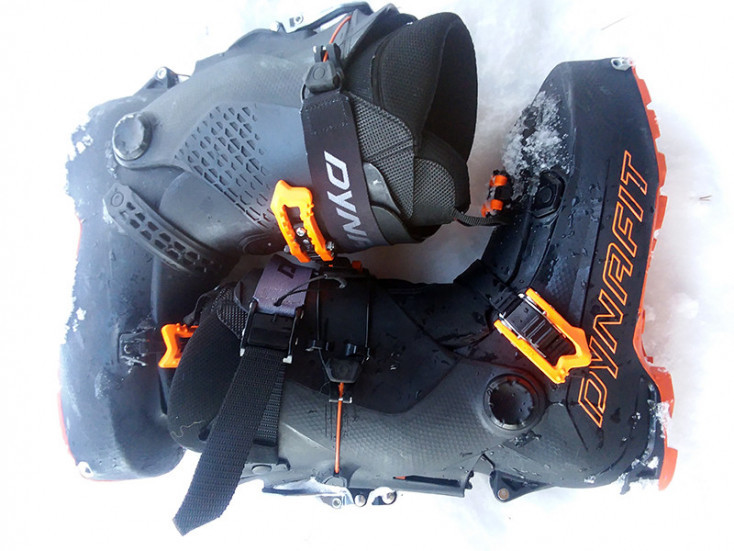 The Dynafit Hoji Pro Tour Ski Boot provides excellent downhill performance and surprisingly good uphill performance.  Historically, most backcountry ski boots have performed well in one realm or the other, but the HOJI PRO TOUR does both well.  The system to switch between walk and ski modes is pretty slick and secures a surprisingly tight fit.  The boot has won a bunch of awards, and these awards seem well deserved.

For decades DYNAFIT has set the industry standard for backcountry ski boots, so it seems sensible to compare the newish HOJI line of boots with their time tested TLT line of boots. This year I am trying out the HOJI boots, after 15 years of skiing almost exclusively in boots from Dynafit’s TLT lineup. I was reluctant to change, but after cooking the liners and getting used to a little more weight on my feet, I’m stoked on the HOJIs.

Generally speaking, the HOJI line of boots weigh approximately 1500g per boot, while the TLT line weighs in at 1100g per boot.  In English, the newest TLT boots weigh about 2.3lbs apiece, and the HOJI boots weigh about 3.2 lbs apiece. Both boot systems have comparable and exceptional range of motion in walk mode, and the HOJI does feel stiffer and more secure during the descent. The HOJI boots are heavier than the TLT’s during the ascent, but they don’t *feel* heavy. And they’re not annoying stiff and restrictive during the ascent like all beefier backcountry boots used to be (and most still are).

Most boots in the HOJI line have 11* of forward lean in ski mode, whereas the TLT line of boots has 15-18* of forward lean.  I read that the HOJI FREE boot has 17* of forward lean, but I haven’t tried those boots out, just the HOJI PRO TOUR and PX models. Personally, don’t notice the difference of angle, but I certainly feel more “locked-in” with the HOJI boots than with the TLT boots.  I’m sure they will soften up a little over time and I’m looking forward to it because I got used to the surfier feel of a softer boot.  I think diehard downhill race types will enjoy the stiffer HOJI boots right out of the box, and folks looking for more forward lean should check out the HOJI FREE.

The HOJI boot has a surprisingly spacious toe box, which means more warmth to me.  Frozen toes can ruin a perfect powder day, so I’m stoked that these boots seem warmer upfront than other boots I’ve tried.  I miss the normal crampon attachment toe that used to be standard on Dynafit boots, but really only one day per winter when I like to do a little ice climbing en route to a classic local descent. The HOJI PRO TOUR boot doesn’t have a standard crampon toe, but the new HOJI FREE boot does.  I already know what I’m going to try to get my hands on next winter!

Materials used on the HOJI boot seem top-notch. These boots feel like they’re built to last. The color scheme on the HOJI PRO TOUR and HOJI FREE boots suits my tastes to a T.  Black and blaze orange is always in fashion here in Wyoming.

As an added bonus, the HOJI line of boots does NOT destroy pant cuffs, a compliment I can’t offer most backcountry ski boots including DYNAFIT’S TLT line of boots.  I destroyed several pairs of pants with the TLT line of boots because in walk mode the top buckle is swung sideways out and away from the upper shell.  There’s is a big knob and several sharp edges on that buckle, which wreak havoc on ski pant cuffs. The vertically oriented and rounded-edged ski/walk adjustment on the HOJI eliminates this problem which has dogged me for more than a decade.

All in all, I’m stoked on the DYNAFIT HOJI line of boots and think you will be too.  If you’re looking for a more affordable boot, softer feel, and brighter colors try the HOJI PU or PX models.  If you want the full HOJI experience try the PRO TOUR ($799.95).  If you want the full experience, more forward lean, and compatibility with standard crampons take a look at the new HOJI FREE ($899.95).