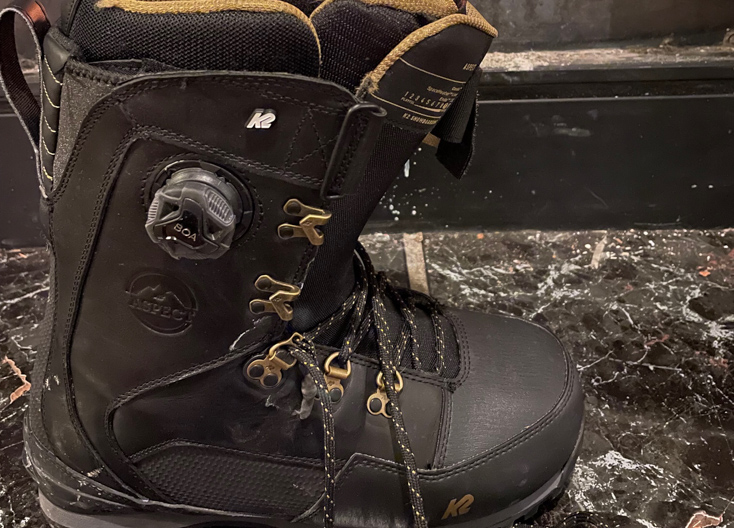 The first ever big mountain boots that showed me heaven were K2 Snowboard Boots so it’s not surprising that now, after many years and testing countless snowboard boots, the K2 Aspect Boots have again taken me to that rare mountain nirvana. With the kind of stiff construction that can take hundreds of hours ascending and still hold out, a grippy Vibram mountaineer sole that grinds into that epic bootpack, and a heel welt for crampon compatibility, only those truly dedicated to hard-charging the untracked and blasting through the backcountry need apply to wear a pair of the K2 Aspect Snowboard Boots.

Start with the outer on the K2 Aspect Snowboard Boots. The full-grain leather uppers and the Endo 2.0 construction ensure your boots will stay strong and durable seemingly forever. The abrasion-resistant toe boxes help you kick in steps setting the bootpack while the abrasion-resistant heel help them retain their shape and give some extra integrity when adding spikes to your soles. Of course the K2 Aspects have Intuition Pro Foam Liners, the gold standard, and they wrap your feet like they were made just for you.

What I love, though, is how tightly you can cinch these up with the combo of the Conda BOA Liner Lacing (over the ankle) and the super sturdy traditional laces locks to really dial them in. Finally the liner-lite “Snow Camp Ready” coating make these into strong, weather-resistant mega-boots that your feet will really appreciate, especially on trips to the yurt, the hut, or the high camp.

I first took these out on an 1800 foot footer on Teton pass, the kind of hiking that really tests the soles and the fit. They dug into the snow like cleats and kicked in steps like a ski boot. I like to dial in the Boa, then tighten up the laces before releasing the BOA to hike. The Aspect Boots were like tank treads wrapping up my feet. It helped that they actually kept my toes super warm thanks to the boots Intuition SpaceHeater Liners. Then I ratcheted them back down for the descent where they were precise to the point that the slightest flex turned me wherever I wanted to go. Admittedly, they revealed how soft my previous boots had become.

When I took the K2 Aspect Boots out for a skin a few days later, I could tell immediately why they ranked 9 out of 10 for “precision” (or stiffness). They held laterally, making side-hilling freakishly easy. They also let me power forward while stomping down where extra impact was really needed. The power distribution from foot to binding to split was mind-boggling.

Then I opened it up on the down. The K2 Aspect Snowboard Boots is for a powerful shredder, somebody looking to dig in deep and rip epic slashes through pow, through crust, through variable, all of it. With the slightest movement they responded, distributing the power efficiently enough to turn full camber down windblown hardpack.

I mean, you can tell from the second you put on the K2 Aspect Boots that these are special. In some ways they feel like you’re putting on armor. There’s the heavy-duty Velcro for the liner to really lock your foot in. Then the Velcro locking tongue to liner really kicks up the strength and connectivity. You can really ratchet the BOA down and tighten the lacing system thanks to the beefy lug design lace locks. It’s the type of armor you can rely on to keep your feet warm, protected, and performing their best. Yeah, I love the K2 Aspects.

I should note, too, that as I was coming out of a tour another splitter immediately recognized them, showed me his own, told me about an epic line he’d ridden with them in Grand Teton Park the day before, and we talked gear for a second before going our separate ways. So I’m not the only one.

The K2 Aspect Snowboard Boots ($499.95) perform like tank treads for every powerful, powder-hungry, backcountry snowboarder out there. Bomber foot-huggers with unbeatable grip, super responsiveness, and the kind of construction that eats even the rowdiest of adventures for breakfast and keeps going all day.

Maybe call them tank tread for hardcore shred heads. I like the sound of that.