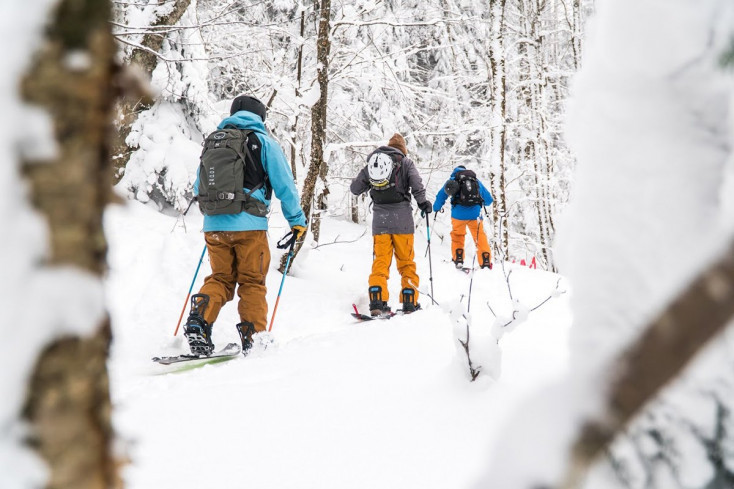 Setting up the K2 Split Bean Splitboard up for touring was as simple as you could hope. Sold as a package, the board comes with pucks and risers already installed, and a pair of skins in their own handy bag. The pucks mean riders using Voile or Spark bindings need only install the touring toe piece and they’re ready to ride, offsetting the cost of those brand’s piecemeal pricing system. Using Karakorams means I was using my own hardware, but as they’re included with the purchase of the binding it wasn’t a great inconvenience.

The K2 Split Bean Splitboard Skin Kit comes with Pomoca Skins, they’re a mohair blend that provides adequate traction in most conditions, and folds/rolls a bit more easily than full-synthetic alternatives. The precut skins attach easily at the front, with a proprietary clip system that passes through holes in the nose, and locks onto the tail with … nothing.

Let’s talk about that for a second. If you look at the K2-provided product shots on their site or with most retailers, you’ll see that there are tail clips on their skins. Maybe the product shots are of a pre-production skin? Maybe the ones I received should have come with tail clips but didn’t? I contacted K2 in an attempt to get answers, but two months later I still haven’t received a response. It’s obviously not a make or break issue in the board, but that’s sub-standard customer service, to say the least.

Determined to test the board as provided by K2, I headed uphill without tail clips. Luckily, that mattered even less than I anticipated on the K2split Bean The skins did get more snow between them and the base than I’d ideally be comfortable with, but they stayed put without issue and cruising uphill was even easier than I expected. The ultra-short 144cm length made it easy for an awful skier like myself to manage, and the overall feeling in touring was less like cross-country skiing and more like backcountry snowshoeing. In particular, the short tail makes kick turns as painless as could be hoped for, once you get the nose of the board lifted.

Heading downhill, the K2 Split Bean provided the same surprising combination of agility and stability I’d noticed on resort runs. It made it the perfect board for Bolton Valley’s gladed sidecountry, moving to avoid obstacles the moment I recognized them. At speed or on hardpack the stiffness of the board maintained confidence, and while the float on powder was less than perfect it was still more than adequate even when weighed down by a rider on the upper end of the recommended weight limit.

All told, the K2 Split Bean Splitboard ($999) delivers on what it promises. It’s not a big-mountain bomber, and it wouldn’t be my first pick for bottomless blower powder. But I live in New England, that’s not what I ride. And for short tours, followed by quick runs among the trees, this board delivers a balance of ideal conditions performance and real conditions practicality. It’s not my dream board, because it’s better than that. A dream board would work great in dream conditions, but the Split Bean works better in the conditions I actually ride in.

Before we go any further, something has to be made clear: I live on the east coast. New England specifically. I love it here, and wouldn’t want to live anywhere else. The mountains, the snow, and the culture here are a big part of how I became who I am, and I wouldn’t trade that for anything.

But that doesn’t mean this is an idyllic paradise. Some things are less than perfect, like early-season snow coverage in the backcountry. So while there are excellent backcountry riding opportunities here, they arrive later than they do in other parts of the country.

Normally this isn’t a problem, because the resorts open early enough, often earlier than most of the rest of the country honestly. Killington only got beat by Wolf Creek this year. So I ride resort for a few weeks while waiting for the snow to fill in. Not a problem.

But this year is different, a good different. It’s different because I got my first splitboard, the K2 Split Bean. So while most of the time I’m happy “only” lapping the chairlift this time of year and getting my legs back in shape, this year I was itching to get out and play with my new toy. So I did the only thing a committed New Englander could do this time of year- I rode my splitboard at a resort.

Setup the night before was as painless as setting up a splitboard can be. K2’s Splittrack mounting system made it easy to line up my Voile pucks, and it only took a little tweaking to get the Voile sliders on with my Union North Star bindings attached. Skins and poles stayed home for this trip, and I zipped the Split Bean into my board bag ready to ride.

Strapping in the next day, the tiny size of this board struck me for the first time. Featuring K2’s Volume Shift technology, this board measures just 144cm. That’s 14cm shorter than my daily driver and shorter still than any powder board I’ve had success on. At 5’10” and 200 lbs I’m no giant, but I’m not a small guy either. Forget float, I was worried this thing wouldn’t have the power to get me down groomed runs.

And what happened was that this board hauls ass. Often times shrunken boards can feel slow, even the ones that claim they ride just like a big board. But because the Split Bean is built stiff, you get a lot of response out of the small footprint, and powerful edge hold when you lay down a turn. It’s surprisingly easy to turn too, with no need to “jump up” to get on edge like you find with some short-fat snowboards.

That isn’t to say the K2 Split Bean ($999) rode like a regular snowboard though. The ultra-short length and Directional Rocker profile (rockered to the front inserts, then flat through to the tail) made this board extremely responsive and capable of ducking in and out of traffic, and eventually trees, with confidence at almost any speed.

So the split part of this splitboard remains to be seen, as does its ability to perform in deep snow. But if anything the groomed artificial conditions at Waterville Valley have only made me more anxious to get this board into the backcountry to see what it’s really about.