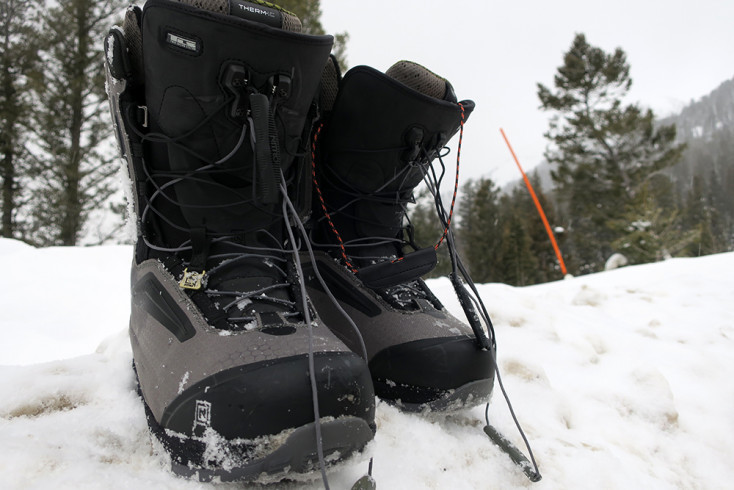 The new Nitro Capital TLS Boots has been my go-to snowboard boot this season.  Nitro’s only true “splitboard boot” offers incredible performance on the way up and especially on the down.  If you’re looking for a stiff boot that can do it all you found it.

Splitboarders are slower than skiers on the skin track, this has a lot to do with the boots.  However, the Nitro Capital TLS Snowboard Boot is one of those almost crossover boots that gives the stiffness and performance of a ski boot on the way up.  And best of all the performance and responsiveness of a high-performing snowboard boot on the way down.

I HATE testing snowboard boots, my feet get angry quickly.  So when I first tried on these Nitro Snowboard Boots I wasn’t sure how I was going to like the overall stiffness.  The boot is not for the faint of heart.

Once laced up though the boot was remarkably comfortable, my foot was held in like it was in a wetsuit.  There was no wiggle room which was nice. I did the standard walk around the office trick for a while to break the boots in then decided to go take a lap.

My first impression on the way up was is this how skiers feel on the skin track?  I had power and performance standing on the toes of the boot I have yet to experience in any of the other big mountain, stiff snowboard boots I have tested over the years. Something was different here.  That’s when I remembered Nitro’s a German company, is that there secret sauce?

Out of the box this boot has been perfect for my needs.  I have yet to mess with the Adjustable Forward Lean, and I highly dought there will ever be a need for the removable tongue stiffeners.

The liners are heat-moldable, but honestly why mess with a good thing?  Maybe after 2-3 seasons, you can heat mold these boots.

Nitro wants you to get into the big mountains with this boot.  The Nitro Capital TLS Boot is crampon ready with reinforced zones at the front and back. Complete with the Vibram outsole for added grip while hiking and super noticeable when walking around especially in icy parking lots, this stuff works.

The lacing system with these boots is solid.  It’s easy to use and best of all won’t come loose on you. The Tls 5 Twin Lacing System has a set of inner laces along with 2 additional laces on the outside.  When you pull up on the laces the boots snug down on your foot.  This is not some gimic but actual real connection to your feet. When the laces snap into place they stay until you undo them at the end of the day.

I don’t usually fall in love with gear this quickly. I also usually don’t just ride one set of boots for the entire season.  Things have changed now that I am rocking the Nitro Capital TLS Snowboard Boots ($499.95).

Is the Nitro Capital TLS the best build snowboard boot of all time?  It’s sure in the running, easily comparable to the best performing ski boots on the market.  Yeah, these Nitro Snowboard Boots are that good.

And it’s not just for splitboarding, you can do it all from park to pipe in the Nitro Capital TLS Boots.