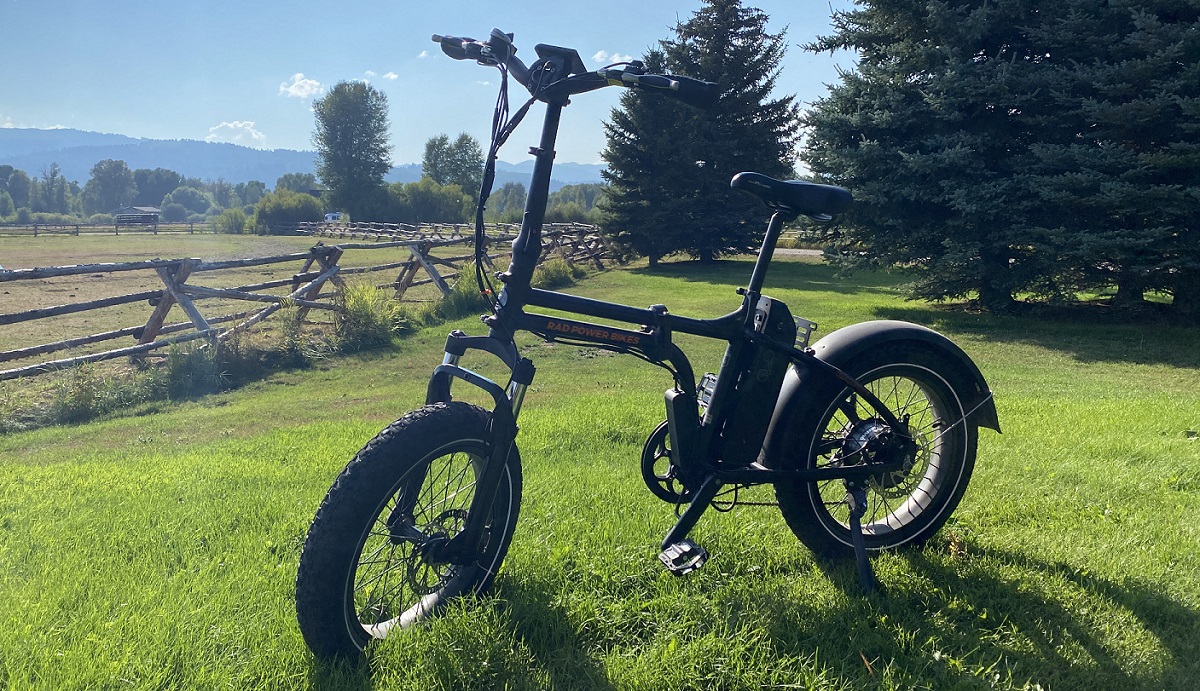 E-bikes have exploded in popularity. Bigger tires have commonplace on just about every kind of bike. There’s been an increasing emphasis on convenience and functionality. All of these trends come together in Rad Power Bikes’ $1,500 RadMini 4 e-bike. The Rad Mini Ebike is a folding big-tire e-bike that at first glance looks like an urban commuter’s dream. But when you look closer, you’ll see that there’s a lot more here than meets the eye.

Let’s start with the motor.

The first thing you’ll notice is that this is a hub-drive motor instead of the more typical mid-drive. You won’t see a big, bulky bottom bracket here like you will with almost every other e-bike out there. The hub-drive motor means less maintenance for riders and enables pedal-free power (though we’ll talk about why that may not be the best idea shortly).

750W isn’t the most powerful out there, but it’ll help you get up to 20 mph with much less effort than you’re used to if you’re coming from a mid-drive bike.

There are two ways to use this motor.

First, you can set the level of pedal assist that you want. There are five levels, each of which provides increasing assistance. At the top, you probably won’t have much trouble keeping at least 17 or 18 mph with a bit of pedaling.

Second, you can hit the twist throttle on the handlebar for a quick boost of power. If you need to make it to the top of the big hill or get started in a less-than-ideal location, this can be a big help.

With about 45 miles to a charge, you won’t be going on any super-epic treks with the RadMini. But you’ll be able to get just about anywhere else. Ands with a top speed of 20mph it hits the perfect sweet spot for ripping around town. And then when your done the battery pack is removable and easy to charge indoors or while still sitting on the bike.

It may not be the most powerful or advanced motor out there (especially now that Shimano has released the latest version of their Steps motor). But at this price, you’re getting a killer deal.

One of the things that stands out about the RadMini is that it seems to be built for just about everything. You’ll appreciate the included fenders as well as the ability to add racks and panniers without much trouble. The included kickstand is great for urban treks. An integrated brake light helps keep you safe in traffic.

Newer version of this bike pack the CST Big Boat 3.0″ tires with a puncture-resistant liner help fend off glass and road debris. We tested on some Kendas, and are told that they’re quite similar, but the CST should be a nice upgrade.

Now, let’s say you like to get a bit rowdy on the weekends and hit your local gravel trails.

The 3.0” wide tires help soak up a lot of bumps and provide traction. The 60mm suspension fork helps keep you stable and comfortable. The motor gives you enough power to deal with some steep hills that you might encounter on your adventures.

It’s clear that Rad wanted to build a bike that could do just about everything. And a folding fat-tire e-bike is a great way to do that.

Being able to adjust the fit of a folding bike is paramount — they’re tiny, so they need to be able to expand to fit riders of just about any size. Rad did a great job here.

The folding frame hinge is pretty unobtrusive compared to some of its competitors, and it has multiple redundant backups to make sure it feels solid when it’s locked out.

The folding, telescoping stem lets you raise and lower the bars easily, but it also folds down even smaller to take advantage of the bike’s very small size.

And, of course, there’s plenty of seat post to help you get the right saddle height.

All of that adjustability means the RadMini can fit people from 5’2” up to 6’2”. Of course, that’s just what the manufacturer website says, so you may find that being at either end of the range may not make for a great fit.

But a handlebar height of up to 48” off the ground and 170mm cranks mean this bike should fit taller people nicely.

While the Rad Power RadMini 4 doesn’t come with any racks, Rad does make both front and rear racks that you can buy separately. They’re very solid-looking and match the frame finish nicely.

Okay, so 275 lbs. isn’t all that much when you combine a person and their stuff. But for a small bike like this, it’s enough. If you need to carry a lot more gear, you’re probably better off with an electric cargo bike. But Rad wasn’t about that. They wanted something affordable. So the RadMini 4 Electric Bike is priced at $1,500.

Let me say that again. This folding electric bicycle costs a little more than an iPhone 11 Pro Max.

The RadMini 4 gives you power, versatility, and the ability to go just about anywhere you want for a phenomenally good price on a folding electric bike.

You won’t get the range of power of a full-size e-bike, especially one with a mid-drive system. But you do get a hell of a lot for $1,500.

If you find yourself in the Tetons on your next vacation, check out Jackson WY Bike Rental and you can take a test drive of the Rad Mini and a bunch of other really cool e-bikes.

If you don’t want to spend a fortune on a bike, and you’d prefer something portable to something full-size, you can’t go wrong with the RadMini 4 ($1,299.99).