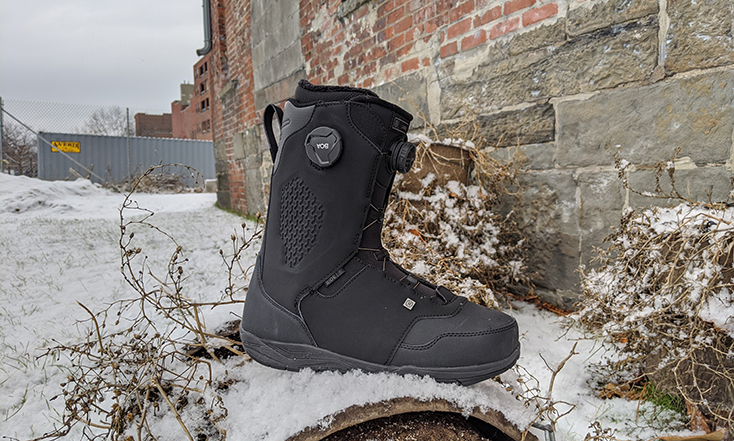 There’s a fair chance you’ve already tried on the RIDE Lasso Boots. They’re RIDE’s bestseller, and one of the best selling men’s boots overall.And that makes them a great pick for anyone looking to get their first pair of “real” snowboard boots, or even experienced riders who want the features and performance that the Lasso provides. But they’re far from perfect, starting with the first thing you do after putting them on.

The Ride Lasso Boot features The Tongue Tied System, which allows one reel to focus on heel fit, while the other reel tightens the rest of the boot, focuses fit where you need it most. That’s more than most Boa systems can say, and allows this boot to adjust much better than I expected.

With that said, I did have to crank down harder than I’d expect to stop my heels from lifting. It wasn’t a huge problem, but it did erase whatever speed or ease of use advantage Boa claims to give you.

Comfort is, without a doubt, the best thing about the Lassos. These boots are seriously comfortable. WIth a mid-wide fit, heel and toe, they’re ideal for people with wide-er feet that aren’t quite expansive enough to step up to an actual 2E wide boot. In fact, I’d say that’s the biggest strike against the Lassos- they might be too comfortable. When a boot is this comfortable and forgiving, it would be easy to miss key aspects of fit (like heel hold, or arch support) when trying them on. But don’t hold that against them, just be aware that you’ll really need to think about fit when you first try these on.

The Michelin-branded outsole offers excellent traction, as good as any you’ll find from Vibram or Continental on any other snowboard boot. And despite that chunky rubber the boots are shockingly lightweight. Not only does that drive home the “wow, these things are comfortable” feeling, but it also helps the boots while riding, skating, or just crossing the parking lot. You’re spending less energy hauling these things around, so that leaves you with more energy to put into the snow.

Unfortunately, you’re going to need that energy. RIDE classifies these boots as stiffer boot, but only grades it as a 6 out of 10 on their own unitless scale. But whether they think this boot is stiff or medium flex, I simply don’t agree. Granted I am a larger rider, and furthermore tend to favor stiffer boots, so I may just be calibrated differently. But all day riding these I felt I was riding in a medium-soft boot. So these might not be my first go-to pair of splitboarding boots.

With that said, a softer boot isn’t necessarily a bad thing. Some people enjoy the flexibility for performance and comfort reasons, I just don’t happen to be one of them. So if you’re looking for a softer (but not noodly) boot keep the Lasso on your list, but look elsewhere if you’re seeking serious support.

All told, these are good boots. Great boots if your stiffness needs aren’t too significant. And while the Boa system doesn’t really save you any time, the heel-focused fit means it doesn’t hurt you either. On top of all that, they’re supremely comfortable, so we give the RIDE Lasso Snowboard Boots($239.95) 4 out of 5 stars.