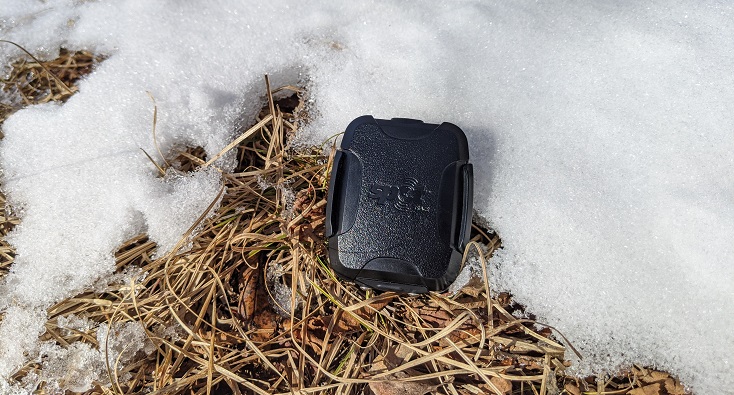 We’re becoming more and more used to staying connected even when we’re “unplugging” by heading into nature. Cell service extends further and further every year, and the growing accessibility of satellite communication has brought connectivity, and the safety that comes with it, to essentially every point on the globe.

And joining this fleet of gadgets sending your data to space and then back down again is the SPOT Trace satellite tracker. A small, simple, nondescript black box with just one button.

The biggest thing to point out here is that the SPOT Trace is NOT a satellite communicator like the SPOT X or Garmin inReach products. The only way to interact with it that doesn’t require a USB cable is the power button. On, or off. That’s it.

And it isn’t a mobile GPS unit like the various handheld map tools from Garmin or Suunto. There is no display, and with no ability to connect to it directly from your smartphone it’s not capable of telling you where you are, unless you’re able to access the SPOT website from your phone, at which point you don’t need the Trace to tell you where you are.

It would also make a poor option for live-tracking. It does offer location updates at 2.5 minute intervals, which is hard to fault. But those updates don’t include any of the metadata, like pace, elevation, or what have you that comes with satellite live-trackers from Garmin or Suunto.

So what IS the SPOT Trace?

What the SPOT Trace has going for it is dead simplicity. It is, by design, just a simple black box with a single button on it. That’s it. With the cover in place over the USB port it is fully IP67 waterproof, making it fully weatherproof and even capable of shrugging off (temporary) full submersion down to 30M.

That simplicity makes it durable in another way too. When I set up my SPOT Trace over two weeks ago, I selected the 2.5 minute update interval. And still, despite sending a message to space every 150 seconds for the past two weeks, I have yet to get a notification that the batteries are low, let alone dead.

SPOT Trace Setup, Functions, and Use

The SPOT Trace satellite tracker comes with (non-rechargeable) lithium batteries, a USB cable for setting your preferences, and a simple mounting bracket so you can affix your Trace to whatever it is you’re trying to track. And that’s it, because that’s all you need. Other than the SPOT service subscription, but more on that in a moment.

Setup is simple, a #1 Phillips gets the case open to install the batteries, and removes the port cover so you can hook the Trace up to your (Windows or Mac OS) computer to adjust your settings for update interval, as well as movement and low battery alerts. After saving the settings to your Trace, simply turn the Trace on using the single power button on the device, and give it a clear shot at the sky. You’ll see a light flash indicating power is on, as well as the signal light which flashes red while it’s searching for a signal, then green once it achieves a connection.

Once it’s connected, the Trace will ping a satellite, and update the website, with the location of the Trace at the stated interval. After the location stays the same for a time that’s selectable during setup, it will update you via email that the Trace has moved. Which makes it so that you don’t have to check the site if the Trace hasn’t moved.

If you’re a boater, you could put the SPOT Trace on your console. Then if a storm, or simply a poor job tying up, causes the boat to drift away while you’re away, the TRACE will not only tell you about it with it’s programmable movement notice, but it will also help you find the boat when you come to rescue it, with the current location visible from any internet-connected device.

Or maybe you leave a snowmobile or UTV parked behind your cabin in the “off season”. You can mount the SPOT Trace on (or even in, since in reviewing the Trace we found the signal will at least semi-regulalry reach through thin metal or plastic layers) your vehicle. And then you get to relax, knowing if some degenerate pulls up with a trailer to steal your ride, you’ll not only know they did but you’ll also know where they took it.

Of course operating and maintaining (or more actually, leasing bandwidth on) a network of satellites isn’t cheap, and it isn’t a one-time investment. So to fund that SPOT does require a subscription in order for your Trace to talk to the satellites. Plans start at under $10 a month, but can go as high as $20 a month for a flexible plan that includes the most frequent update intervals. Not cheap, and since it’s comparable to the plan cost of satellite communicators or GPS units, it’s kind of hard to justify on it’s own. But that’s not how you should think about the Trace.

Because of all the things it can’t do, it doesn’t make much sense as a stand-alone product. BUT, since it’s service works on the same plan as a communicator like the SPOT X or Gen 4, it works as an add-on to the service you already have. So if you already have a satellite communicator through SPOT, you can add Trace to your plan and get the peace of mind for your motorcycle, trailer, or whatever simply for the cost of the Trace itself.

Normally we try to be fairly objective with our ratings here at Mountain Weekly News. We tell you if we think the product is good or bad. But the SPOT Trace isn’t a normal product. It’s use-case is subjective, and how good of a product it is depends on what you’re trying to use it for. If you’re already a SPOT subscriber and you want some peace of mind when you leave your boat, bike, or snowmobile for a few days, weeks, or months, the SPOT Trace is ($99.95) an easy 5/5. But outside that kind of use-case it’s hard to imagine giving it any score, let alone a good one. It’s simply just not a product you would use unless you’re trying to keep track of your toy hauler (or whatever).