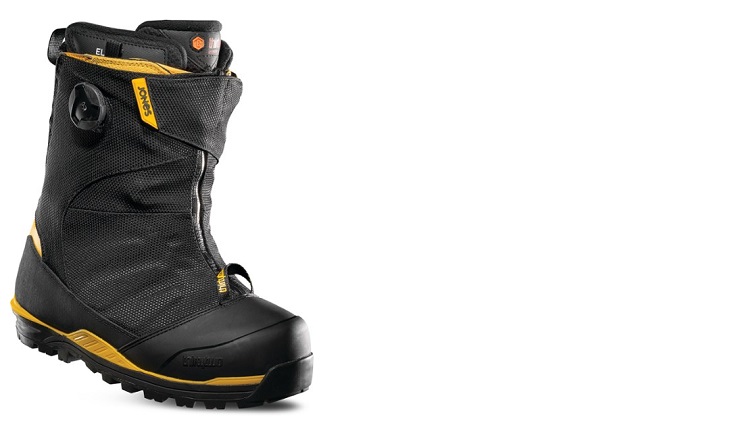 With the latest edition of Jeremy Jones’s signature splitboarding boots, you can walk, you will walk, and you’ll walk hard; the remodeled ThirtyTwo Jones MTB Boots reinforce the whole living legend status of The Jones, and their rejigged design is poised to augment your backcountry experience.

The ThirtyTwo Jones MTB Boots are designed “from the ground up” with crampon compatibility, steep bootpacks, rigidity and high-speed stability in mind.

They’re tightly constructed with a virtual utility belt of features, and it was this utility belt comparison that had me thinking of Batman the first time I stuffed my feet into a pair.

Sure, the black and yellow color scheme easily brings up thoughts of the Dark Knight, but it’s the boots resemblance to a monster bat that really struck me- coverlet unzipped, boot laces splayed and inner boot loosened, stomping into one of these is like stuffing a giant bat in the face with your foot.

Once you’re in, the three-layer dip of tight-as lacing on the thirtytwo Jones MTB Boots smacks you in the face.

Personally, I have nearly non-existent calves (saving up for implants, but that will be another review). Finding a snowboard boot, especially a stiff boot geared towards the terrain I like to ride, has been a challenge- Usually I’m left swimming in boot-tops like some water-winged goob confined to the shallows for his own protection.

But with the thirtytwo Jones MTB, I get great lock-down not only from the conventional lacing and inner but by utilizing the “walk-mode” BOA feature to its max potential when ready for the down; the ability to easily back things off and on with the BOA system is a treat.

And I admit, I was leery of the BOA drop-back and walk feature when it first debuted- It made me think of driving a convertible car through a carwash with the top down, BUT, since logging a pile of miles and getting up and down to the early season nitty-gritty, I now consider myself a full convert. The walk feature saves my calves on the gradual ups, and when locked into ride mode I feel more secure and faster response on my edges than I have in years. No more floppy-top boots for this guy.

*So far this season I’ve put in close to 30km on my tours “in” with these splitboard boots from thirtytwo, and I’m happy to report zero blisterings. I plan to add some basic insoles for a bit more arch support (I have poodle feet, but that’s another review), though that’s just a matter of personal preference. I’ve boot packed some steep schnarb, kicked toeholds into some steeper gnar, and the boots are performing over and above what I’d expected for a top of the line boot. For splitboarders the thirtytwo Jones MTB Boots ($599.95) is going to be hard to beat.