With almost 2 full seasons of testing the Union Expedition Splitboard Bindings, I can say without a doubt these are the most responsive snowboard like splitboard binding on the market.  I have so much trust in these bindings that I’ve actually taken a pair catskiing and heliskiing in British Columbia. Enough said?

You may have heard about the pin.  Yep, Union is using a pin for their Expedition Splitboard Bindings. Does the pin work?  Sure does, just like the old pins Spark and Voile used in the past.  Although Karakoram never got into the put the pin in the whole game.

As mentioned above I went cat skiing, and heli-skiing while wearing these bindings underfoot with a pin holding the entire system in place.  Was I hesitant to use this setup for that sort of terrain, 100% so.  However, I knew these bindings worked perfectly splitboarding and I really enjoyed the style of riding on these bindings over my Sparks. I took a gamble and took these to BC it paid off.

Honestly, if Union was making a binding that was failing, we would have heard of it by now. 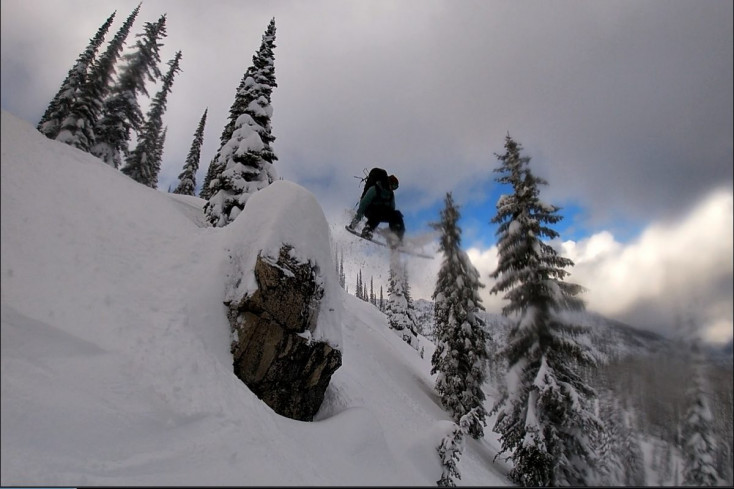 What these bindings do have that you most likely will cringe about is a few degrees of rotational play depending on how well you set up the bindings.  Even when perfect there is a noticeable 1-2 degree of play no matter how many times you try and mount the Expeditions.

Do you surf or skateboard?  If so can you remember a time your feet stayed in one place for the entire day?  It doesn’t happen that way in board sports.  With the small amount of rotational play found on these bindings, you get a more playful ride going downhill just enough to allow your feet to move a little bit.

Does your splitboarding include hanging onto steep icy big mountain lines?  These bindings are not for you. Go with the Spark R&D Surge or Arc bindings instead.

Like to ride powder, surf hit pillows and add freestyle to your backcountry game. You will want to use a pair of Union’s and most likely won’t ever go back to the other major splitboard manufacturers.

Does your splitboard ride differently from your favorite resort board?  It shouldn’t…

One of the first things you will notice when putting your boot inside the Union Expedition Splitboard Bindings is just how darn comfortable they feel.  This is a snowboard binding that has been adapted to work for splitboarding.  Union is using padding on the base of the binding, just like every other traditional snowboard binding on the market.  I can’t seem to figure out why the other splitboard binding manufacturers are not including padding out of the box?  Union is.

When it comes to the straps these again will remind you of snowboard straps, cushy padded ones that feel great on your foot and more importantly respond with the same quickness you have come to expect from your regular snowboard bindings.

The Forma Ankle Strap and toe strap are made of soft rubber that works in temperatures all the way down to -30F (although I don’t recommend splitboarding or going outside when it’s that cold unless you dig frostbite.

For the rest of the specs on the binding head over to the Union Website.

As with the previous versions of the binding the climbing ladder is simple to use and the easiest to get up and down of all the other splitboard bindings out there.  One thing I have noticed is the more you use the climbing ladder the more likely your skins are to fail.  More on that to follow in another splitboarding article.  If you can put a skin track in, an efficient one there is really no need to use the risers while touring.  Try it out sometime, of anything it will make you that much stronger.  Sort of like climbing in the baby gear of your mountain bike vs using a tighter gear.  One is easier, one is more efficient…

When its time to put the board back together Union made things a little easier with the new Expedition Bindings by using a nonstick material on the footbed as well as highbacks. 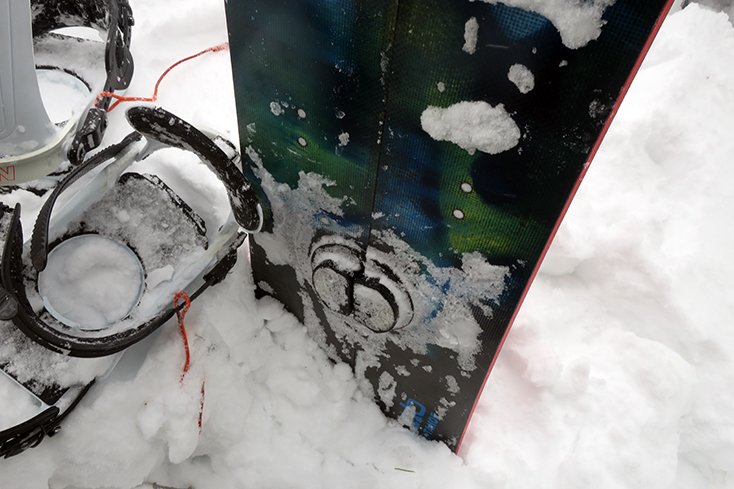 As you can see, snow still sticks to the bindings however it’s really easy to knock it off by clanking the bindings together.  For the area around the disk, I use my glove to clear snow and even the pin if need be.  One tip is to take the pin and put it through the disk slot before even spinning the binding on.  This will make sure the channel is free of snow.  Take the pin out and then put the binding back on.

In 70+ days of using these bindings I have only had trouble getting the bindings on twice while in deep snow.  The culprit? I put the bindings on backwards.  Which is tough to do as each disk is lined up for the specific binding.  If you run into this problem, make sure your buckles are facing outwards.

Watch the video below to see the first time I transitioned the old Union Expedition Bindings, it’s 1000x quicker now.

>>> One of my favorite bindings of the year, easily made our list of best splitboard bindings.

What Can Be Improved

When in tour mode the bindings are locked into place via a pin system.  The pin is easy to use as you simply slide the pin into the hole.  The one thing that sucks about this system is the tiny plastic tabs Union uses to lock the pin into place.  I have broken them on all the pairs I tested. Although this sucks and says something about the construction of the binding it doesn’t really seem to effect touring. You can see the broken off tab in the photo below: 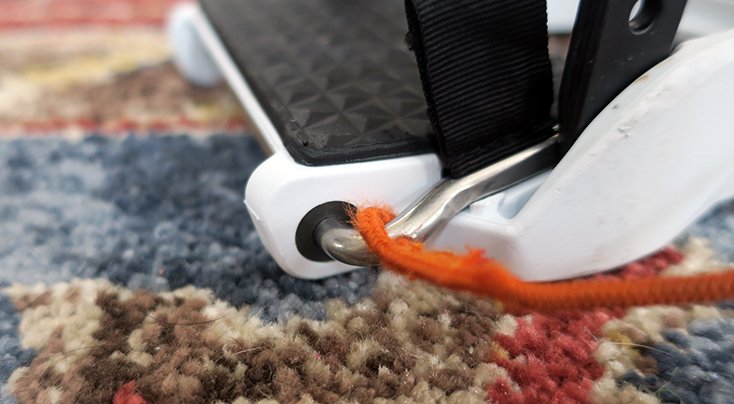 The reason the binding stays in place when touring is your foot actually stands over the pin and the toe strap helps to keep the pin from moving up.  There was one time though where the binding came off in tour mode due to the plastic piece missing. Which sucked, especially considering I was putting a skin track up a face that had a potential of sliding. Next thing I knew my entire binding was off the ski, awkward at best.

One more thing that has started to happen as of late is the rivets have started to pop out of where the pin goes in.

So there are couple tweaks Union should fix on this binding ASAP.

If you care more about the experience you have going downhill while splitboarding or while riding your splitboard there is no better binding on the market than the Union Expedition Splitboard Binding.

The Union Expedition Splitboard Bindings will truly change the way you look at snowboarding on your splitboard.  If you’re new to splitboarding try out a pair of the Union’s and you might not ever need to ride anything else.  For the Spark crew, give them a try you make enjoy the ride Union offers on the descent.