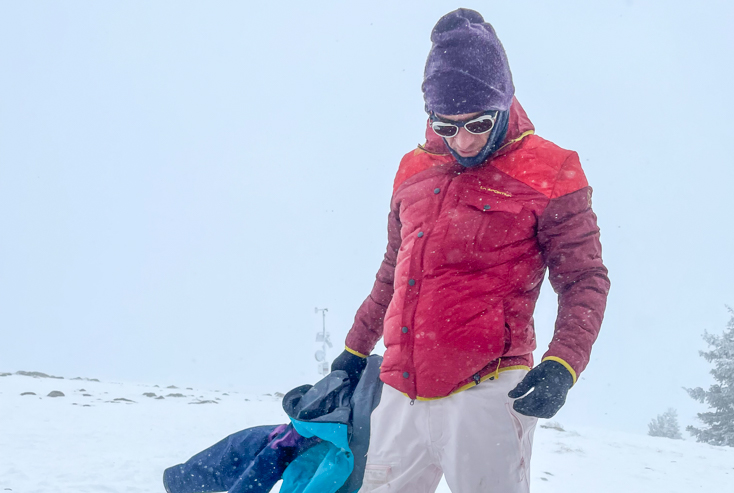 There are few outerwear bangers that hit as hard on all aspects as the La Sportiva Wild Down Jacket. Hardly a time have I worn it without getting compliments on the look. It insulates better and feels warmer than about any other micropuffy I’ve worn, with a next-level durability refreshingly old school. Which goes perfect with its classic OG ski styling. But how wild is the Wild, really?

La Sportiva’s Wild puffy may look like a fashion statement but don’t let it fool you: there’s some serious tech here. I’m talking an outside layer made of some surprisingly tough WSL03 recycled polyamide. Then there’s the 610 fill power with 70% down, 30% feathers, making it a great mid-layer and even in many cases a great “only layer.” Not only does it work, but it’s actually PURE GOLD recycled down.

The hand pockets are deep, and the chest pocket easily fits most smartphones. The styling, though, is where the Wild Down really breaks away. Between the retro look and the button closures on top of the zipper (and closing the cuffs) mean it would look just as in place in Chamonix in 1972 as it does in 2023. And it weights about a pound.

But how did it stack up though? In a sentence, it’s one of my favorite pieces of gear this year.

It’s no secret that La Sportiva’s Wild looks sick. I’ve worn it as my street puffy most of this winter. Ask the barista at the local coffee shop who told me she loved it. Ask my friend who said it looks awesome but wondered to the warmth as gear that drips retro style can’t really be functional. But function it did.

As an insulation layer stuffed into the bottom of my pack until I hit the summit, it kept me toasty, from early season mountaintop hangouts to frigid, windy just-sub-freezing descents. Even on days lapping the resort it killed it. Even on a night where I skinned up a local ski hill while the temps hit -5 at the base, pushing past snowguns with my puffy on the outside, it kept me the exact right temp and never showed worse for wear. But where I was really impressed, especially on a hut trip in the Centennials.

The temps on the early-December trip never made it above 5. With wind chill it hovered in negative single digits. And my body never got cold. Even après when we were standing on the “deck,” watching the weak sun disappear. On plenty of descents I wore it outside my shell, not wanting to take off too much on the windy, frozen peaks. As I tore past trees not a single one managed to puncture the outer. Of course the biggest test was when I cut down a couple trees.

As part of opening the hut, we had to get wood. I volunteered to wield the chain saw and all the abrasion that meant. I’d forgotten I had on the La Sportiva Down Jacket as I rubbed against the tree with the saw, and even as I stood behind it and pushed to ensure the tree fell into the sweet spot. Once I finally came to my senses about what I was doing, I looked all over it for those tell-tale tears you could expect from most micro puffy’s. Nothing. It truly dominated.

La Sportiva Wild: Made for the Wilderness. There are plenty of micropuffies out there, jackets that pack down and provide insane lightness-to-weight but none I’ve tried can handle real exploration like La Sportiva’s Wild. The warmth is top-of-the-category. The style makes it a head-turning bit of self-expression. And the outer material turns it from a mere insulator to a truly hardy outer wrapper.

If you’re hungry for wilderness, rough on your gear without the bank to buy a new jacket for every expedition, and still believe that tech gear should look fire, you need to get the La Sportiva Wild Jacket ($199.99). It’s guaranteed to be my top puffy for years to come.