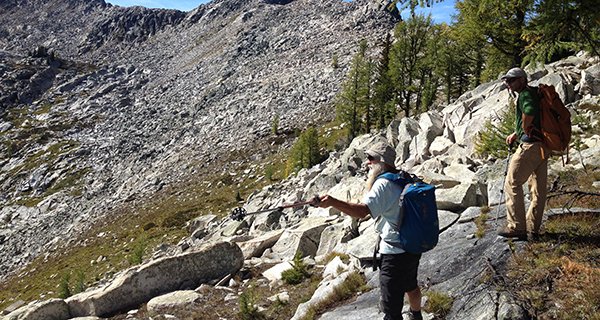 After the California gold-rush of the 1849’s, it seemed as though fortune seeking prospectors had made their way into every nook, cranny and outcrop the American West had to offer.

Known as “sourdoughs” (seasoned miners that knew a thing or two about bush-craft and DIY baking) many were drawn north when news of significant strikes in British Columbia’s “Silvery Slocan” made their way south of the border in the 1890’s.

Americans, Canadians, Swedes, Norwegians, the Chinese and a dozen other nationalities converged on Sandon, Slocan, New Denver and other boom-towns in the region. 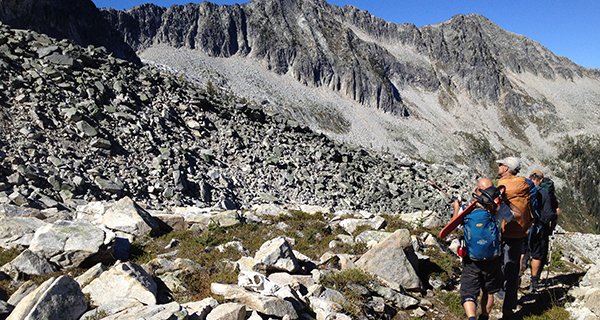 The Payne Mine, Reco, and a dozen other claims became famous throughout the western world, but most mines and old sourdoughs were destined to live out their days in relative poverty and anonymity.

Today the boom-times are a memory, but many of the towns and settlements live on alongside ghosts of cities past; Three Forks is gone, as are Comaplix and Zincton, but Kaslo, Silverton and others persevere.

The backcountry skiing and snowboarding are endless, as are the sledding, fishing, biking and hiking…

And sometimes to unearth an old track, a forgotten path, all one has to do is draw back the curtain of ridge-top foliage.

The Sourdough Traverse is not only a trail, but an adventure and homage too. Wending its way from Idaho Peak above Sandon and Cody out into the screeching wilderness of the Kokanee Range, the trail speedily transitions onto ridge-tops that offer views of glaciers in every direction.

The vision of Mount Carlyle Lodge owner Brian Cross, small guided groups can retrace the footsteps of historic miners through the substantial summer tenure; whether you’re a geologist by trade or interest, a history aficionado or a dyed in the wool hiker, the Sourdough route is stacked with views, vistas and stunning surroundings.

A former prospector himself, Cross has restored much of the original trail and made significant improvements along the way, an autumn foray giving him the chance to point out old tailings piles and exploratory drillings still evident on the landscape.

Taking three days to complete, hikers arrive lakeside at alpine tarns the first two nights, each campsite fully equipped with stoves, fuel, tents, and sleeping pads; all guests need to pack is a sleeping bag, food, and personal sundries, the last night of the traverse depositing them at 7200 feet at Mt. Carlyle Lodge itself, a sauna, hot-shower and bed awaiting them inside (the hike itself never drops below 6500 feet of elevation!).

Having hiked the traverse in late September, the turning colors of the alpine larch and the crisp evenings were a terrific reminder of the coming winter, a terrific hurrah to the impending end of summer.

Being able to pack light while ridge-walking was a huge plus, the ability to go heavy on chow and camera gear a welcome change from the norm!

Descending from Mt. Carlyle back to the ghost-town of Cody on day four, don’t forget to pause at the old trapper’s cabin and say a thanks to the pioneers that saw fit to explore this wild land; unopened preserve jars still sit on the pantry shelf, awaiting a return or the next wave of glory-seeking explorers.

Returned safely to civilization (or what passes for it around here), visitors can explore the mountain-bike trails in and around New Denver, the nearby Galena Trail if they’re still keen for either some hiking or biking, or one of the area’s many natural (wilderness) or developed hot-springs; Sorry, no links to our secret hot-springs here! 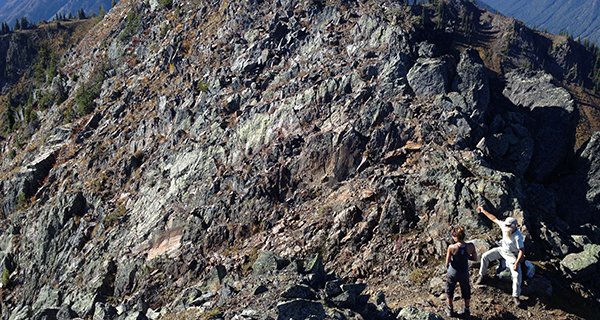