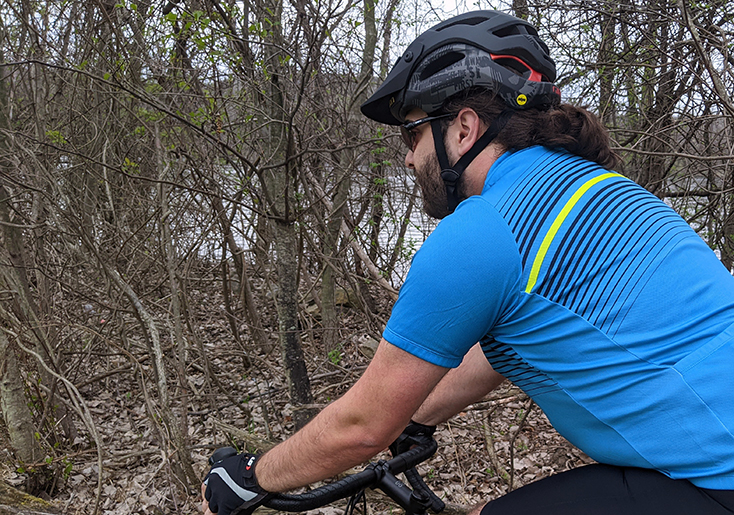 Whether you’re wearing one out of obligation or just good sense, a helmet is required equipment for most every cyclist every time they straddle a bike. This used to mean stuffing your head into a styrofoam cooler, with all the poor breathability and unflattering aesthetics that implies.

Luckily helmet design has improved dramatically over the past several years, leading to sleeker, more comfortable helmets like the Giro Manifest MIPS Helmet we’re talking about today. It’s a great looking helmet, with moto-inspired style, and it’s packed with all the technology you’d expect from one of the top bike helmet brands. In fact, despite the fact that they avoid ever describing it as a flagship, the Giro Manifest MIPS is the brand’s most expensive open-faced offering. So what does that get you? Well to start with, it gets you more protection than the old brain buckets used to provide.

A big selling point of this helmet, and a major justification of the cost, is the MIPS Spherical Technology. For those who don’t know, Multi-directional Impact Protection System is a third-party technology that is licenced by a manufacturer to put in their helmets. So just like you can have Gore-Tex in gear from Dakine and Salomon, you can have MIPS in helmets from Giro and Smith.

As an aside, some people forget the “directional” part of the MIPS. But MIPS is not a multi-impact protection system. A helmet with MIPS, just like every other certified helmet, is a single-use item. One good hit damages the foam in such a way that it can no longer provide the same protection it did before the impact.

What MIPS claims to do is use a sliding layer to absorb some of the rotational energy from a standard fall before it gets to your brain. The idea being that by allowing your helmet to move, your brain moves less, reducing the likelihood and severity of concussions. Or so they say.

Because that’s all we have to go on at the moment. While research does show that MIPS does what they say, helping to reduce rotational energy transferred to your brain during a fall (and therefore reducing the likelihood and severity of a concussion) there is at this time no test confirming that the technology works, in abstract or in a model-specific application.

So it comes down to belief. MIPS believes their technology provides better protection, and I’m inclined to agree with them.

Giro claims this “Spherical” application of MIPS, which puts the sliding layer between to separate pieces of Progressive Layering foam, provides greater protection by allowing for a greater range of rotation, extending the MIPS protection in more directions.

But in practice it’s hard to see how it would do that. It’s certainly more elegantly integrated into the helmet, especially compared to other designs where the MIPS layer is just added to the interior of the helmet, but I don’t see any reason to expect better protection from this Spherical design. No worse protection either, of course, but no better either.

So if the protection is comparable to many other similarly priced options, what makes the Giro Manifest MIPS Helmet stand out from the crowd? Giro would say it’s the airflow, since they designed the helmet around their Wind Tunnel Ventilation System. And maybe for the trail riders this helmet is designed for, that carries some weight. But since I am an unrepentant gravel rider, spending time in the drops more than I’m on the tops, the integrated visor blocks air from entering the front of the helmet leading to a hot spot in the front of the helmet. Nothing unbearable, and probably solved by a more upright riding position, but worth noting especially if you’re looking for a multi-discipline helmet. Especially since the visor is adjustable, allowing it to stay out of your line of sight even when bent over the bars, but not removable.

Let’s stay on the visor for a moment. It is one of the larger visors you’ll find on an open-face helmet, which may explain a rather unusual feature of the helmet. At the back of the helmet a textured Goggle Gripper helps your eyewear lock-on. I’m not sure who is wearing goggles with an open-face helmet, but if that’s you the Manifest MIPS is definitely worth a look. If your eyewear is a more conventional pair of sunglasses, Giro includes similarly-textured grippers inside the helmet, though to be honest I never found a way to engage them to hold my sunglasses when they weren’t on my face.

So if the protection is comparable, and the features are use-specific, what makes this helmet stand out? Well, like so many other pieces of gear that touch your body it’s all about fit.

The most obvious way this presents itself is that in order to get protection you have to be wearing the helmet. Of course this means that if your head literally doesn’t fit it’s not good to you, but it’s also about comfort. If a helmet isn’t perfectly comfortable, will you be willing to wear it on long rides? Or what about short rides around town? What you may be willing to put up with in some situations may not be ideal in others, leading to you not wearing or at least not wanting to wear your helmet.

Luckily, the Giro Manifest MIPS is one of the most adjustable-fitting helmets we’ve ever tried. The Roc Loc Fit System uses a simple dial adjust at the bad of the helmet, with three different mounting points allowing for better height adjustment than you’ll find on most helmets. The model tested was a size large, nominally rated for up to 63cm noggins. But it still fit well on my frankly massive 65cm skull, providing better side and rear coverage than I’m used to getting. The result is despite my freakish proportions this helmet looks right on my head, something few other helmets can do.

Of course there’s more to fit than simple circumference. The Manifest MIPS, like all Giro helmets in my experience, is a rounder and shorter (front-to-back) shape than comparably sized helmets from other brands. If that matches your head shape you’re in luck, but if not it may not be worth considering other options instead.

Which really is the final verdict on the Giro Manifest MIPS Helmet ($260.00) – it is well designed, well equipped, and extremely comfortable if it matches your head shape.