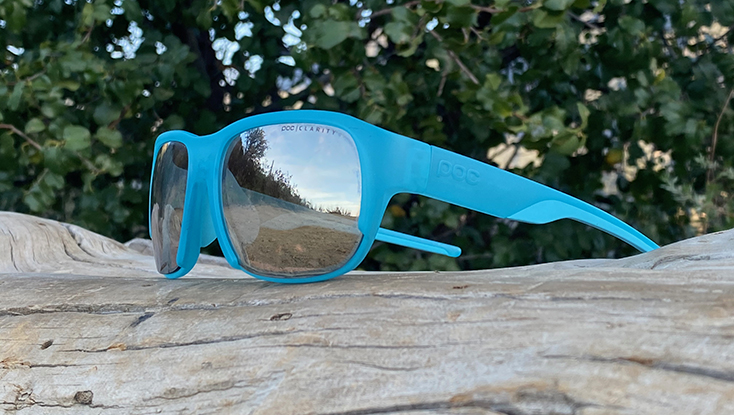 “I don’t know who this Carl Zeiss guy is, but he sure knows his sunglasses.”

I was in the middle of a fire-road climb with a riding buddy of mine a few weeks back. He had just noticed the POC Define Sunglasses I was wearing, making a point of asking if they were my sister’s, given their baby-blue frame color.

This buddy also happens to be a professional photographer, so I figured I’d troll him back with my Zeiss quip. He took the bait, thinking I meant it, and stopped dead in his tracks to look at me aghast. “Dude,” he panted. “Seriously?”

Carl Zeiss had nothing to do with these sunglasses considering he died almost a hundred years before I was born. But the lenses of these Define glasses were developed with the company bearing his name — a global outfit that’s been at the cutting edge of lens technology (cameras, eyeglasses, microscopes, telescopes, etc.) for more than a century.

Zeiss’s expertise is clear — pardon the pun — from the moment you put on the POC Define shades. Their clarity and definition were noticeably better than my own Oakley Flightjackets that I’ve been using for the past 18 months.

The difference was like jumping up to 4k resolution after using 1080p for a year and a half. The minutiae of the trail in front of you (I tested the POCs while riding MTB and gravel) is crisper, your eyes feel like they’re processing inputs faster, and the contrast between light and dark was nicely balanced. You also don’t get that annoying magnified self-reflection from the lenses when in bright sunlight.

On our local trails here in Southern California — where a single ride can alternate between direct, bright sunlight and then heavily shaded woods — the lenses on my test pair were consistently on point (they were the Silver Mirror lenses, which let in 18% of light, according to POC).

But the Define’s are just great because of their lenses. Theses POC cycling sunglasses are built with frames that are super-light but also plenty durable, made from a hearty but flexible plastic that can take plenty of abuse. They stay put on your head even in the roughest of riding terrain without slipping or falling off, thanks to discreet but functional rubber on the nosepiece and arms.

The hinges of the arms will pop out rather than break, so there’s some nice longevity baked into these shades. And if the baby-blue look of my test pair isn’t your cup of tea, there’s a compelling rotation of more subdued grey, white, and black frames plus a buoyant light yellow to really keep things interesting.

The frames also allow plenty of airflow between the lenses and your face, so I never had problems with fogging on slow climbs (but I ride in a super-dry climate, so your results may vary if it’s wetter there).

There are a few downsides, though.

For one, it doesn’t appear that these lenses are replaceable or swappable. Well, actually, it APPEARS that they should be given how there’s space for them to just slide out of the bottom of the frame, but that’s not the case. Which seems like a wasted opportunity.

I also wouldn’t recommend these for the avid roadie (to be clear, they’re not designed for that anyway). There’s just too much frame blocking your peripheral vision if you’re regularly looking over your shoulder for traffic.

Minor quibbles aside, the Define’s are a durable, high-performing pair of glasses wrapped in a laid-back aesthetic. Baby-blue frames or not, the POC Define Sunglasses ($179.95) will definitely be in my regular rotation moving forward.

Oh, and if you run into Carl, tell him I said nice work.