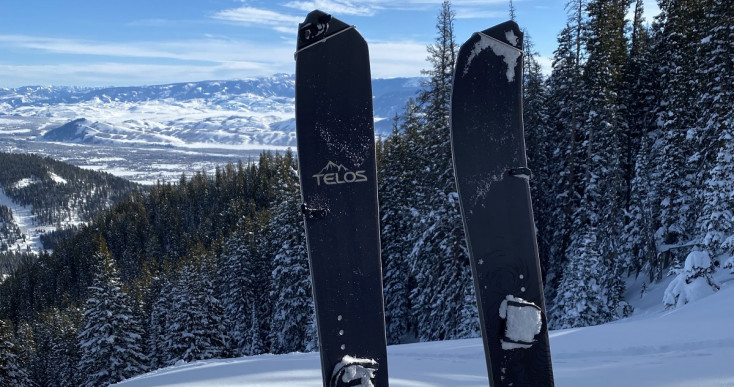 Telos DST Freeride: To Make all of the Backcountry into your Playground

Rip the skins; join the skis; send the Telos DST Splitboard. In the past few years of trying out all these upstart splits from Colorado, I’ve arrived at one simple truth: those Colorado folk know how to make a splitboard. Telos builds on that legacy with one of the best splits to perform in real backcountry conditions, from pow to hardpack to sastrugi, and even more one that kills it going downhill but is pretty great going uphill as well.

The Telos Surf Series is their inspired pow-devouring super-planks, made of lightweight materials and engineered to crush the backcountry.  The Telos DST Freeride brings in my favorite split camber – rocker on nose and tail, camber underfoot, reverse camber-to-flat between the bindings. The nose and tail stay up, underfoot the camber lets you grip into hardpack, the reverse in the middle lets you float and the flat helps you on the skintrack.

The nylon top sheds snow pretty well stiffened by poly sidewalls and PTEX 4000 Graphite Laminate base with their torsion control core all equates to one thing – a super stiff and durable board that’s also freakishly light.

Plus the board comes with its own skins, made exactly for their planks by the guys at Kohla to avoid having to cut and adjust it yourself.

DST stands for double swallow tail. This board is a swallow twintip, which is actually pretty brilliant since it not allows for maximum float whichever way you’re going, when in splitmode it has the shape of a standard ski with a pointy center and receding sides, ideal since we all know skiers have a huge advantage of efficiency.

The first day taking out the Telos DST Freeride was a sleeper pow morning skinning up a track covered in loose snow. The uphill went smooth, and the double swallow tail turns each half almost into a ski shape, with a narrowing nose on each splitski. Plus the flat and stiffness maximized contact with the track. The skins gripped the snow and made it nearly impossible to slip back, though like with other Kohlas there was some issue with them staying on in really cold or really deep days.

The DST Freeride, while making the up better, also creates better float whether riding regular or switch, keeping you popped up.

Then dropping down a long ridge into a gully. I was surprised with how well it floated given the camber; it behaved like a pow-specific board. A couple days later, I took it out on a day when there was a penetrable crust buried under 10 inches or so, with sastrugi and windboard up top. It was able to hold an edge, maybe not as well as full camber but certainly better than anything you’d want on a pow day. Then when we got down lower, it surfer the soft and had enough power behind the board to penetrate the crust.

Another day we dropped into a little chute where the snow went soft to windblown firm turn to turn and not only did the DST Freeride adapt easily, it also inspired me to pop and spin off every rock I found along the way. That’s truly where it excels. You just want to jump off everything and the Telos DST Freeride can handle any landing you throw at it, even landing straight onto hardpack.

This board inspires to do more than just get down the hill – it makes you want to play and pop, to arc big turns and snap it back like surfing an endless wave. The shape and build is made for landing regular and switch in any and all conditions.

I’ve taken the Telos DST Freeride on hardpack and in bottomless, breaking trail and skinning up a resort at night. What I found is one of the most versatile splits, as well as one that has a freakish weight-to-stiffness ratio, perfect for powerful riders. It’s certainly a bit more floaty that traditional camber, and the skins that come with it failed me like two days in (though not again since). But if you’re a powerful explorer who also likes to spend your time going downhill popping, grabbing, and spinning off every hump in the pow, and you like a lightweight ski-shaped set of sticks for the up, the Telos DST Freeride Splitboard ($889.95) is your jam.