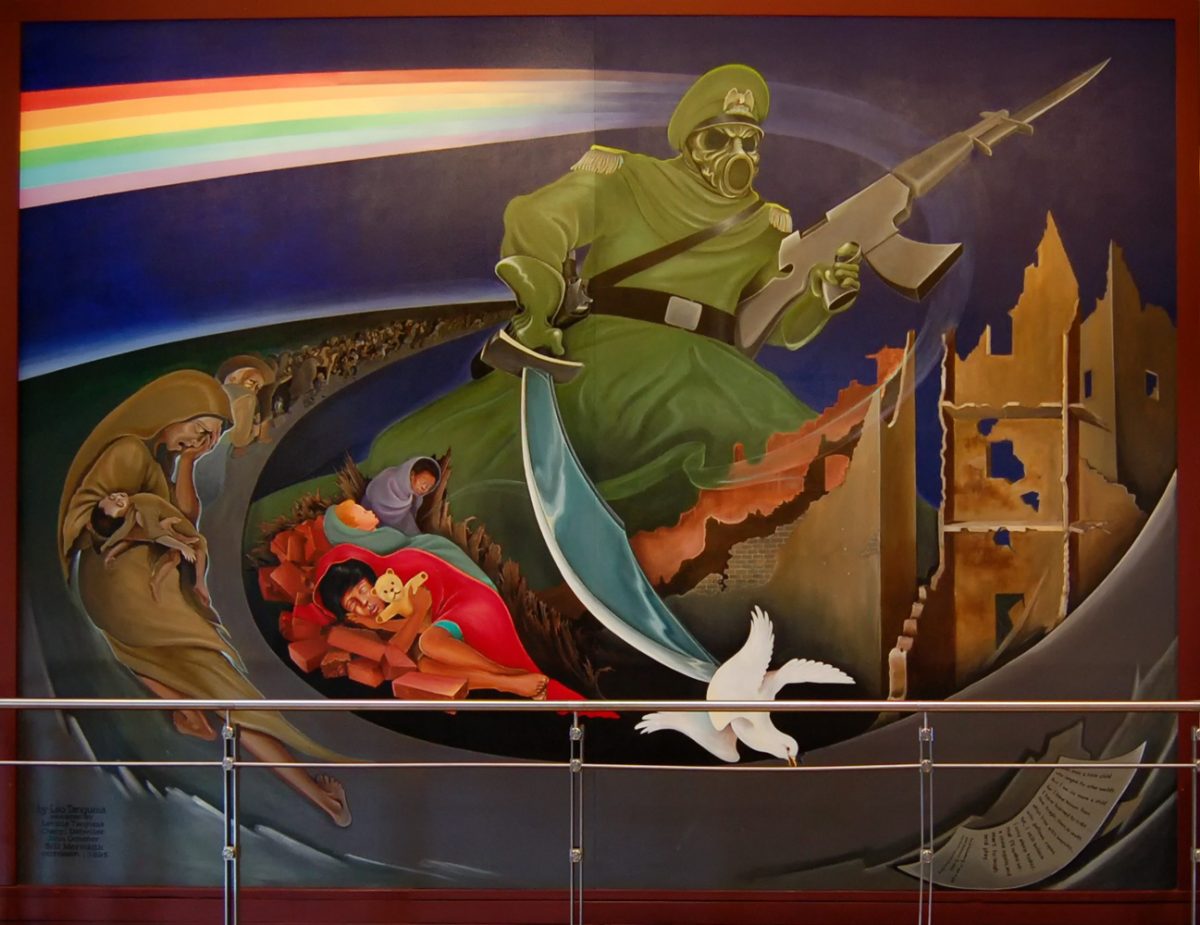 The Denver International Airport Paintings always give me a creepy feeling anytime I find myself at DIA. And it’s not just the public art, but the whole Denver airport conspiracy that really makes me wonder and open my eyes when I find myself in Colorado.

The images shown in this article are far from soothing and came at a cost to Colorado taxpayers in the amount of $100,000. The symbolism shown below is surely unique for a mural in the Denver Airport.

The Denver Airport Murals artist’s name is Leo Tanguma. This mural has me at a loss for words, titled “Order of Chaos” could this be a sign of times to come? We see a military figure that resembles a German SS soldier wearing a gas mask with a machine gun in one hand and a sword stabbing a dove in the other.

The dove, a symbol that has been used in post-war peace movements shown being stabbed doesn’t sit well with this author, not sure about you?  This Leo Tanguma Denver Airport painting does not seem in place welcoming people to or from an international airport. -On the left side of the mural is a mother holding a dead baby with hundreds of other mothers lined up doing the same.

-In the right lower corner (you can barely see it in the photo) is a piece of paper containing an actual poem written by Hama Herchenberg a 14-year-old who died in a Nazi concentration camp.

The letter is, a chilling reminder of events that happened less than 100 years ago: “I once was a little child who longed for other worlds
but I am no more a child for I have known fear
I have learned to hate how tragic, then, is youth
which lives with enemies, with gallows ropes.
Yet, I still believe I only sleep today. that I’ll wake up,
a child again, and start to laugh and play.
Hama Herchenberg, died December 18, 1943 Auschwitz Concentration camp”. Peace and Harmony? Aside from the forest and city burning, children laying in coffins and animals that seem to be extinct these seem to be nice pieces of artwork created by Leo Tanguma a Chicano muralist.

After lots of bad press the Airport official’s made the decision to remove the Denver Airport Murals. However the following still exists in plain site. Smack dab in the middle of the DIA terminal lies the cornerstone show above. Upon closer look the words reveal themselves to possible sinister things to follow as stated by the New World Airport Commission. The NWO New World Order? Conspiracy Theories? Should we start talking about what’s under the base?