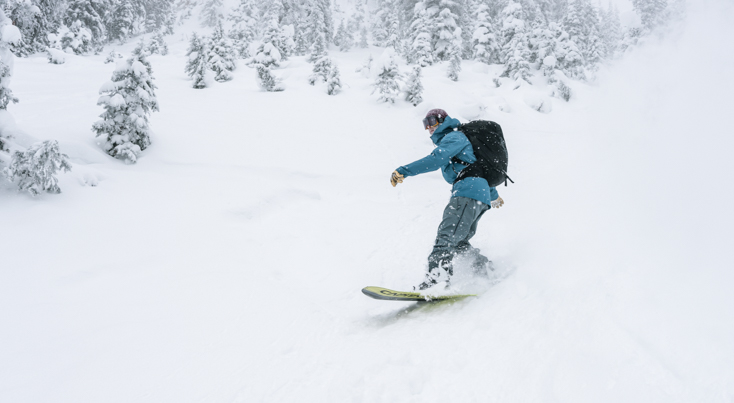 For riders in the backcountry looking for a splitboard that offers control and stability the CAPiTA Neo Slasher Splitboard is a great option.  CAPiTA’s Neo Slasher Split with its ALPINE V1 Profile is camber dominate making this splitboard great on the uphill and perfect for splitboarders that enjoy camber while going downhill.

The CAPiTA Neo Slasher Splitboard has a ton of camber, with the majority being traditional camber underfoot followed by a little zero camber toward the tail.  When a brand starts messing around with the profiles of the board underfoot towards the tail it usually means they’re trying to build a more splitboard friendly design for the skin track. Which CAPiTA was able to achieve here.

CAPiTA calls this blend of camber the Alpine V1 Profile which works really well on the skin track thanks to the boards ability to push down and make solid contact with the snow on the ascent.

I felt the camber blend was a little on the stiff side with CAPiTA rating it 7 out of 10.

This CAPiTA Splitboard really means business with it’s directional shape which over the years has been inspired by the uber popular Charlie Slasher Snowboard in the CAPiTA line.  The Neo Slasher Splitboard is a directional splitboard with a little bit of taper from the nose to tail.

Although the Neo Slasher is directional board with taper, it still has that twin tip look to it and can be ridden switch from time to time if needed.

For the most part the Poplar core aligned with Paulownia wood has been seen in the industry before but where things changed a bit is CAPiTA added an ABS centerline down the middle of the core. Perhaps this was for added durability along the inside edges, but what I noticed this ABS strip did along with the boards stiffness it seems to have taken some of the torsional flex away from the board.

So for someone wanting a freestyle board in the backcountry I would look at other boards that are able to flex from heal to toe a little easier.  However for the person wanting to go fast, ride powerful and make really big turns this profile allows you to ride with insane amounts of power.

Just make sure you have the legs for such riding, which makes this splitboard best for advanced riders. Or splitboarders looking to upgrade to a stiffer camber dominate profile.

This splitboard does not come with climbing skins however most of the major skin brands will work with the Neo Slasher Splitboard as it has a traditional splitboard shape, height and width.

The CAPiTA Neo Slasher Splitboard ($799.95) would be best for big mountain riders that spend long days on the skin tracks and have equally long descents.  This splitboard is able to go fast and ride over chunder snow without getting bucked around too much.  That being said the CAPiTA Neo Slasher Splitboard requires a stronger rider that has the ability to really maneuver this board.

Touring someplace like AK with deep powder or above treeline in Europe?  If so you may have found the perfect splitboard for big mountain riding.