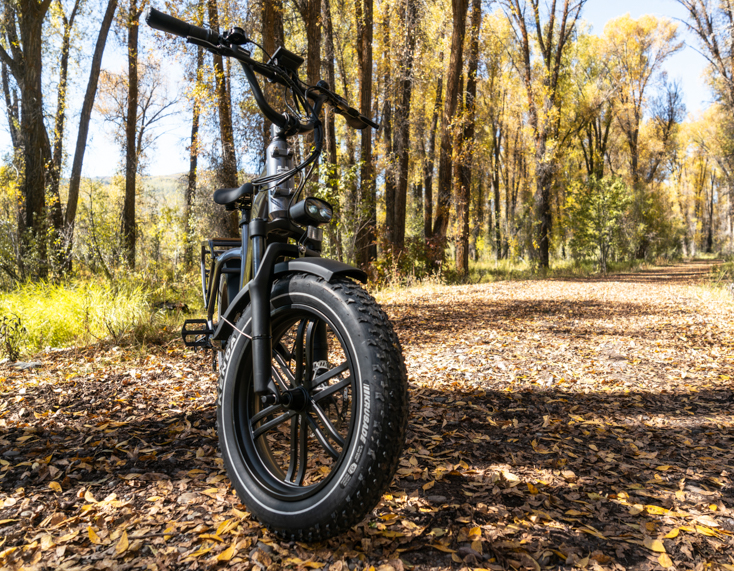 The Himiway Big Dog E-Bike is built to be your cargo-carrying sidekick while zipping across the city and around the neighborhood. This Class 2 ebike boasts an ultra-wide rear rack and a powerful 750W motor to easily transport kids, groceries, or whatever else you need for your on-the-go lifestyle. Priced at $1,999, the Big Dog is a great choice as a daily commuter and multipurpose bike in and out of the city. Find out below what we thought of Himiway’s new cargo ebike and whether or not it pulled its weight during testing.

Founded only five years ago, Himiway continues to defend its status as one of the most trusted names in affordable ebikes. Himiway’s extensive lineup has started to compete more heavily with rival brands Rad Power Bikes and Aventon which also specialize in fat tire ebikes on a budget.

The Big Dog is marketed as a cargo bike, but it’s worth a deeper dive into the bike’s actual classification. When I think “cargo bike”, I immediately think of extended frames with a long rear rack or a large cargo space at the front of the bike— good examples include Yuba Bikes or the much-loved Bullitt. The Big Dog, however, is closer to a standard ebike that has a beefed-up rear rack and mounts for a large front basket. The step-thru design makes hopping on and off the bike a breeze when riders are making deliveries or running errands.

This bike is like a more premium version of the moped-inspired Himiway Escape E-Bike with its compact silhouette and 20” wheels. The Big Dog, however, comes with an adjustable seat height so riders can achieve full leg extension, a feature that’s a must for many cyclists. I’d say that the RadRunner from Rad Power Bikes is the Big Dog’s most direct competition while the seriously capable RadWagon is closer to the traditional cargo bikes that we’re used to.

The Himiway Big Dog Electric Bike is built around a 6061 aluminum step-thru frame that’s easy to mount and dismount. With the adjustable seat, the frame works well for riders between 5’2” and 6’5”. The smaller-diameter wheels and step-thru design is great for smaller riders who want a fat tire bike that fits them better than traditional 26” models that might feel like a bit too much bike.

The main advantage of the Big Dog is the integrated rear rack that’s significantly wider than standard racks and comes with an attractive wooden platform. The entire bike has a payload capacity of 400 lbs. and the rear rack can support up to 150 lbs. I’d say that’s enough for a kid to sit on the back, but I wouldn’t use it as a seat for an adult— there aren’t any footholds anyway. To carry more items, riders can purchase the compatible Himiway bag or just get creative with strapping stuff to the back.

A powerful 750W rear hub motor delivers plenty of pace and torque and performs well on hills, even under heavy loads. There are five levels of pedal assist as well as a throttle mode that can reach a top speed of 20 mph. The bottom bracket area has the appearance of a mid-drive motor but seems like that’s simply where the controller is placed. That said, maybe the Himiway Big Dog E-Bike could take a mid-drive in the future.

During our tests, we noticed there was a little lag when starting the motor, but the bike gets to speed quickly. Keep in mind that the rear hub motor combined with the back rack means the bike is significantly rear-heavy.

A highlight of the Big Dog is the high-capacity 20Ah battery integrated into the downtube. It’s a fairly beefy downtube, but considering it holds the battery and there’s no top tube on the step-thru frame, I enjoy the look. The range is rated as up to 80 miles which allows riders to put in some serious distances before they run out of juice. A dual LED headlight and rear brake light run off of the battery— the taillight has cool Himiway branding which is a nice touch that I haven’t seen on other ebikes.

The mechanical components make sense for this cargo ebike, including the robust alloy wheels and reliable Shimano Altus 7-speed drivetrain. The rigid wheels won’t ever go out of true because of heavy payloads and the 4” Kenda tires offer plenty of grip and cushion. There’s additional travel from the front fork to handle light off-road terrain. The Big Dog works well on dirt and gravel but performs best on pavement or dirt roads without too many potholes.

One major shortfall is that the chain slaps against the kickstand when riding over bumpy terrain and makes a noticeable ringing sound. This is due to the center-stand kickstand design which was an innovative idea, but I hope Himiway resolves this issue in the next generation of the Big Dog.

There are Tektro mechanical disc brakes, however, I would have liked to see stronger hydraulic brakes for this brawny 79 lbs. bike. The similarly-priced Himiway Zebra comes with the hydraulic option, so it’s unclear by the Big Dog doesn’t have that upgrade.

When it comes to the final touches, the Big Dog rocks a comfortable seat and built-in fenders to keep away dirt and mud. The simple Himiway LCD display works great but isn’t anything fancy; there’s a USB port to keep your smaller devices topped up.

The interesting choice to install BMX-style handlebars is a smart one. It means there’s lots of real estate for accessories and a phone mount, however, the fixed stem can’t raise or lower the bars. I’m a fan of the super-clean, integrated bell fitted next to the left brake lever, too. The cable management at the front of the bike is decent but with room for improvement and the metal Wellgo-branded pedals are a durable part that can take a beating.

If you frequently load up your bike or want a fun way to shuttle your kid around, the loyal Himiway Big Dog E-Bike ($1,999.99) could be your new best friend. Riders who aren’t convinced by moped-style ebikes will like this fat tire commuter that splits the difference and remains affordable. Load up and hop on to quickly complete your tasks with this workhorse ebike.