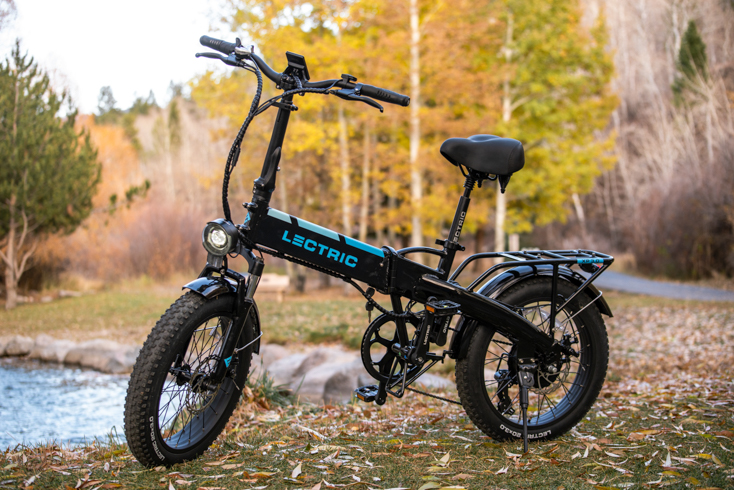 As one of the most eagerly-awaited launches of the year, the all-new Lectric XP 3.0 brings big updates to this popular folding electric bike. This third-generation XP hits the city streets and boasts a more powerful motor and other performance-boosting tweaks across the e-bike. The price tag hovers around $1,000 depending on current deals and we got our hands on the latest model to put it to the test.

Stick around as I dive into the details of the Lectric XP 3.0 and determine if this model is really a game changer or just another wallet-friendly electric bike.

The XP 3.0 hit the market at the beginning of November of this year and is available in standard, step-thru and long-range versions. Now in its third iteration, this recent addition demonstrates Letric’s commitment to keeping its flagship model within the lineup. This model boasts a cool look and quickly folds down to fit into small spaces such as the corner of a room or trunk of a car.

The Lectric brand is a specialist when it comes to electric folding bikes and has soared to the top since its start in 2019. The brand was founded by two lifelong friends Levi Conlow and Robby Deziel out of a garage in Phoenix, Arizona, working together with Levi’s dad who was on the hunt for an affordable electric bike. Unconvinced by preexisting models, the pair took matters into their own hands. They leveraged their respective entrepreneurship and engineering expertise and launched the Lectric LX, the precursor to the wildly successful original XP model.

The biggest changes to the previous XP 2.0 model this time around include a more powerful 1000W peak output motor, a longer 50mm front fork, and better mechanical disc brakes. The 3.0 E-Bike is built around the same foldable aluminum frame and comes in both step-thru and standard geometry.

At a glance, the XP 3.0 looks very similar to the 2.0, but that’s not necessarily a bad thing— the bike’s characteristic look has already resonated with tons of cyclists and Lectric has focused on making smaller upgrades to individual components. The XP 3.0 maintains the same total weight of 64 lbs. with the battery installed.

The new 500W motor sits within the rear hub and has a peak output power of 1000W. That’s an improvement of 250 watts over the previous model along with 55Nm of torque to get you up the hills without any problems or motor strain. The bike delivers a serious boost with five pedal assist levels as well as a throttle mode that’s activated via a right-side twist grip.

The throttle’s top speed is 20 mph. A major plus is the ability to configure it as either a Class 1, 2, or 3 e-bike in order to adapt to the local regulations wherever you’re riding.

On the standard model, there’s an integrated 10.4Ah battery with an estimated range between 17-45 miles depending on the power mode. The 3.0 is also available in a “Long-Range” package that bumps up the battery’s capacity to 14Ah and extends the range by around 35% as claimed by Lectric. To remove the battery though, it’s a complicated process where you have to awkwardly insert and twist the key underneath the frame and fold the bike open. It’s an odd design choice that’s the same as before but maybe we’ll see a change in the future.

Another listed upgrade is the move from 40mm of front suspension to a plushier 50mm setup that’s harder to bottom out. It doesn’t seem like much but for such a compact bike with small 20” wheels, that extra travel made a noticeable difference. It would be nice to see a rear suspension or off-road version but that might be asking a bit too much for such a feature-laden foldable ebike. The shock absorber seat has built-in springs to achieve a comfortable feel and riders have noticed it sinks a bit because of that additional give.

To round out the spec package, there’s a Shimano Tourney 7-speed drivetrain and upgraded mechanical disc brakes equipped with motor inhibitors. The rotors have increased in diameter from 160mm to 180mm for more stopping power, but during our tests, they were a little loud out of the box and required some adjustment.

We observed that the shift and brake cable management and wrapping at the front of the bike were better than the XP 2.0, feeling better finished. The 20×3” fat tires provide a super stable ride and are knobby enough to handle light terrain and dirt paths with ease. The XP 3.0 handles great and conquers a variety of riding situations, from local paths to bumpy trails and pothole-filled streets.

Some additional touches that caught our attention were the large, bright front headlight and useful handles for moving the bike. The headlamp draws power from the battery and is bright enough for most recreational riders, but you’ll want to purchase a separate rear light to match. The curved handle near the seat tube junction helps carry or lift the bike when it’s folded and a rear handle is great for pivoting the hefty electric bike when you need to.

Lectric recognizes that more and more riders are flocking to ebikes and has included customizable options to suit a wide range of needs. There’s the ability to add a front basket as well as install a padded seat on the integrated rear rack. It’s rated for less than 150 lbs. but we’ve definitely seen it handle a bit more than that on the open road. We love the possibilities of long-range, passenger, or cargo packages that can transform this bike into a versatile urban workhorse.

Lectric has done much more than simply refresh their flagship XP model and instead achieved a successful upgrade with the 3.0. The comprehensive series of improvements go beyond a quick facelift and lets riders satisfy their need for speed while taking advantage of handy features. Whether you’re drawn toward the Lectric XP 3.0 ($999.99) for its foldability, versatility, for a daily commuter or eye-catching aesthetic, this newest generation is sure to impress on the city streets and wherever else you spin your wheels.