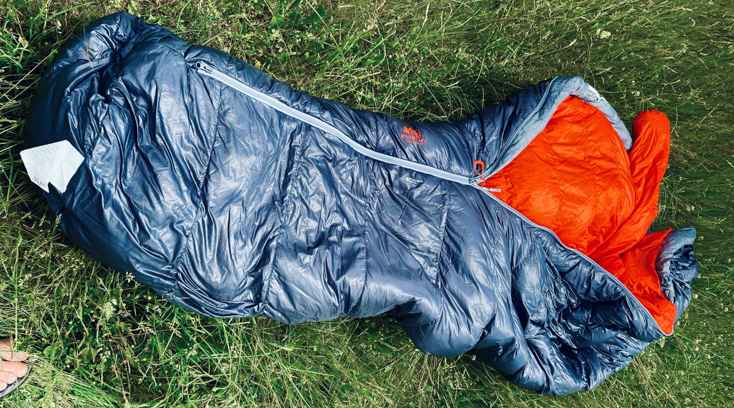 Magma is hot, elemental heat you can depend on to always run hot, and the REI Magma 15 is no less elemental and every bit as toasty. The fill is freakishly warm for how light, while the Pertex outer (promising “Elemental Protection”) makes it even more protective than you expect out of down insulators these days. But yeah, for that next-level sleeping bag to take on your next big summer backpacking trip, the Magma 15’s are more proof that REI’s home label is blowing up the outdoor world.

Start with the fill, a key to any insulator. The REI Magma 15 Sleeping Bag boasts 850-fill-power goose down that delivers comfort down to 16 degrees but is perfect at 28 degrees. That means this bag will keep you toasty from Spring through to Fall. Then the weight: at 1 pound, 12 ounces, you’re delivering epic warmth at less than 2 pounds.

Where it’s really impressive is its outer.  The Magma 15 has a Pertex Quantum outer, meaning it’s more waterproof than most mummy bags with the same weight and down warmth, but it also has a 15-denier liner to make it comfortable. Finally, they threw in this diagonal zipper to make zipping up a cinch. Speaking of cinches, there are drawstring cords to wrap the hood around for that extra bit of insulation.

Now it’s time for the test.

I first tested this hiking around the Routt National Forest around Steamboat, home of a different sleeping bag brand. The magma was so light and small that I almost worried that I’d left it in the car. Yet there it was. I got in it that night and it was perfect for sleeping au naturel, frankly. Then came the real test. I let the girlfriend try it one night. She stayed toasty, a difficult accomplishment for any bit of insulation. As she told me later, the Magma 15 is “girlfriend approved.”

On our wanderings the bag was constantly being thrown out, then folded back up and shoved into a pack. I was worried that the included stuff sac would get torn but not once. Even more, when back out and open it instantly took shape and puffed out, unlike some other goose-fill down sleeping bags that really bunch up.

We also tried doubling up inside the bag, just to check out spaciousness. It was doable, impressive for a mummy bag. It should be noted that REI has a women’s Magma with a right zip while the men’s has a left zip so you can actually zip them together, another rarity in mummy bags.

Seriously, though, the weight is the superstar here. I’ve never tried a sub-2-pound bag that was so warm when the temps drop while sleeping near the top of a mountain. This is officially my go-to, no-questions-asked, spring-to-fall backpacking bag of choice.

There are lots of mummy bags out there. Some heavier ones might work below 0 but get stifling in the summer (and are pretty heavy). Others hover in the 30s for protection (and are still heavier than the Magma). The Magma 15 literally hits the perfect nexus of warmth and weight, a rare and vaunted designation almost as magical as that mountain peak where you’re planning on taking it.

With the Magma 15, REI has made a bold statement: our years of selling gear has paid off with our ability to make the best, most optimized gear out there.

If you’re looking for a perfectly-poised backpacking mummy bag, there’s really no question that the REI C0-Op Magma 15 Sleeping Bag ($399.99) is that heavenly body-hugger you’ve been dreaming of all your life.