Amazon.com has taken a huge market share out of the snowboard retail world. You might be as surprised to see Amazon.com selling snowboards from brands like Jones Snowboards, Lib Tech, Capita, Rome, GNU and more being sold through this online channel.

In the past, these brands would easily sell through their entire lines so why now dump this gear on Amazon and who is actually selling these boards? 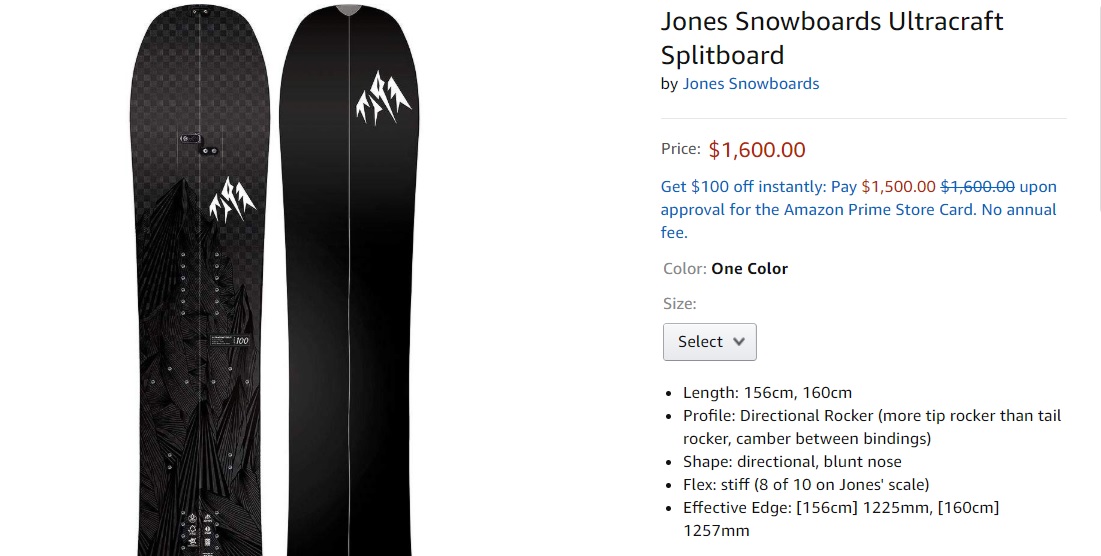 Jones Snowboards used to sell out early in the season.  These boards were in high demand across the board.  The board above is one of the more limited higher end splitboards.  The Jones Ultracraft Splitboard ($1,600) is the sort of board you would expect to see hanging behind the counter at a ski shop.

Next up is Lib Tech, I still love Mervin but am sort of surprised to see a company that is hand-making snowboards in North America even allowing them to be dumped on Amazon.com, seems dirty at best, however, Lib’s not alone here.  Lib Tech Banana Magic was another one of those boards you wanted to “buy early” those days seem long gone.

In years past never Summer would routinely sell through their entire lines, to see some of the best hand build snowboards being dumped on Amazon sort of sucks and makes me wonder just how strong snowboard sales really are these days.

Not Sold Everywhere eh? Let’s be fair, I have known the Never Summer crew going on 15+ years and fully have their back in almost everything they do. Except for this. Now it’s actually not Never Summer putting their Swift Snowboard on Amazon, it’s one of their “shops” Windward Boardshop that’s fulfilling orders.

Another brand that was using Amazon in the past that has pulled most of their snowboards is Arbor.

For a full list of every snowboard brand being sold on Amazon.com, you can visit Amazon.com/snowboards

Odds are you will start seeing Amazon.com snowboards ads being delivered, is this a good thing? Snowboards Amazon, really?

13 Comments on "Is your Favorite Snowboard Brand Available for Cheap?"